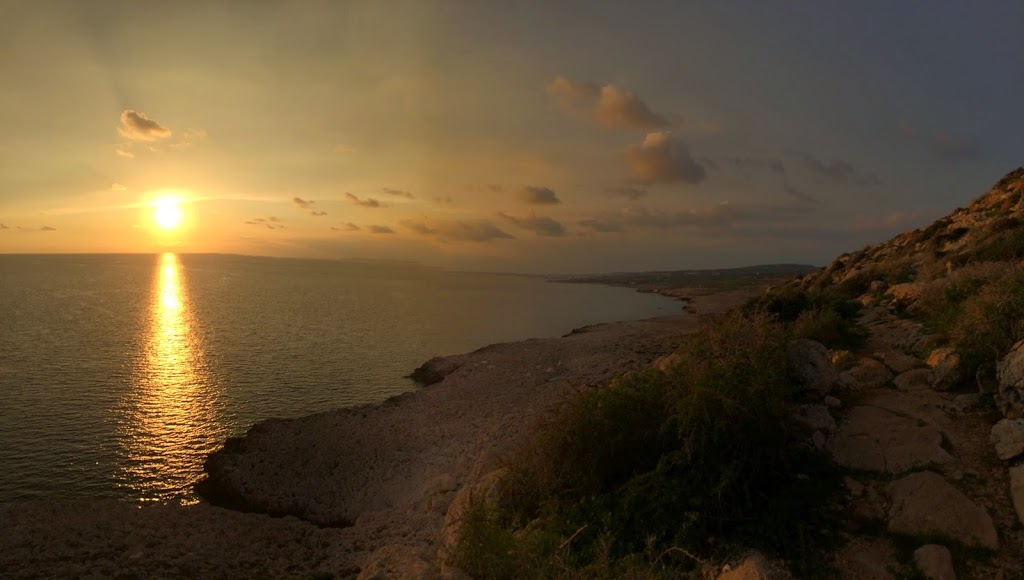 11.00 a.m.
I’m sitting in a church yard today feeling the breeze on my skin whilst the sun lays it’s rays all around me. The heat bounces up from the light coloured stones and envelops me in its warmth. This is the weather Cyprus can give you in the winter instead of the unpredictable cloud that has covered our previous 2 weeks, this is a promise of summer. In the next few months any shade will feel like a refuge from the heat you cannot escape from. It’s great to be in shorts in January, slightly bizarre, but great!
2 p.m.
Late
Lazy
Lunch.
We have traveled to Ayia Napa and headed for the harbour. The wind down here has given up fighting with the sun but the odd breath finds its way onto the wallowing sea which flashes small glints of light on its surface. It is one of those days when the world relieves you of your worries and escorts you on its own tour of all its wonders.
Talking of tours. We have spent the last few days showing our family around the south eastern corner we are staying in. Unfortunately, yesterday’s excursion went a little wrong a la family Griswald! You may have seen the film years ago called ‘National Vacation’ where Chevy Chase takes his family to the theme park called Wallyworld only to find it closed! Well, all I can say is that at least Chevy had a Chevy! We decided to park in Kapparis and walk to Pernera. Mmm, that’s quite a walk. It’s about 5 miles, we will need to take some refreshment. Unfortunately, that ran out after a couple of miles in the hot sun.
“Don’t worry”, I said, “It’s just round the next cove, a restaurant will be open.”
But I was wrong, everything, and I mean EVERYTHING was closed. By now, our legs were shot, our bellies were empty but more importantly we had run out of water! We dragged our knuckles through the marina hoping for an oasis to show itself but was met with closed shutters, empty cafes and deserted bars.
“Have no fear, Marlene” I declared! “If we walk up to the main strip there is bound to be somewhere that is open.”
As we hauled our reluctant limbs up the hill we came across a supermarket. The sign said ‘Closed’ but the door was open and sitting outside were some young Cypriots. We asked if we could buy a bottle of water and not only did they oblige us they gave it to us free of charge along with a Lucozade! Although our internal batteries were dead at this point, the shot of sugar put us into the red: we could go on a little further. The collective mood lightened for, ooh, about 10 seconds and then we set about finding a restaurant. I was tempted to break out into the ‘wheels on the bus’ song as I’d seen that tactic employed successfully on a recent episode of ‘The Apprentice’ but thought better of it. As we reached the main road, I spotted a pub that said it was open all year round, 2 till late. I rejoiced and looked at my phone. It was 12.50.
Moving on, we circumnavigated Pernera looking for any shop to be open. We passed another supermarket that was closed where a lady sat in the window stripping some vegetables while her husband sat in the sun. Desperate and tired, we came up with an idea. We could catch the bus back to the second cove we passed, take a quick walk back to the car and somehow save the day. Another piece of luck came seconds after we sat at the bus stop, a bus actually arrived. This moment of triumph soon turned sour though as the driver told us that our German mascot, Adonis Tazmania, was only allowed onto the vehicle in a box. Well, the ‘King of the Island’ wasn’t going to stand for that and he declined the ride. We halved our numbers: women and children first, and so myself and John were left at the bus stop with the mutt and a very long walk back to the car. The bloody dog has a lot to answer for, I can tell you. We looked at each other, stiffened up that lip we British are so proud of and began the 5 mile return crawl! I don’t remember much of it as I spent most of the walk telling my legs everything will be alright!
Sometimes, lying is the only way to cope!
So take it from me, if you do fancy a trip out here for a visit and you see a sign that says ‘Devitt Tours’, walk past it. It’s a dodgy old company run by a pair of lunatics! Trip Advisor rating?
No stars.