Wilsons Promontory is worth the drive

As we sat on Squeaky Beach today, the horizon seemed emptier than normal, the sea purer and then we realised that we were on the most southern point of Australia. Directly south of here is nothing. This is where the world turns upside down and we fall off of the edge of it. To the south east is Tasmania and further on is New Zealand.
To make it to Squeaky Beach involved driving an hour south from Foster over a mountain pass and into a caravan park called Tidal River. From here, we could pick our route via the customary man-made boardwalk. 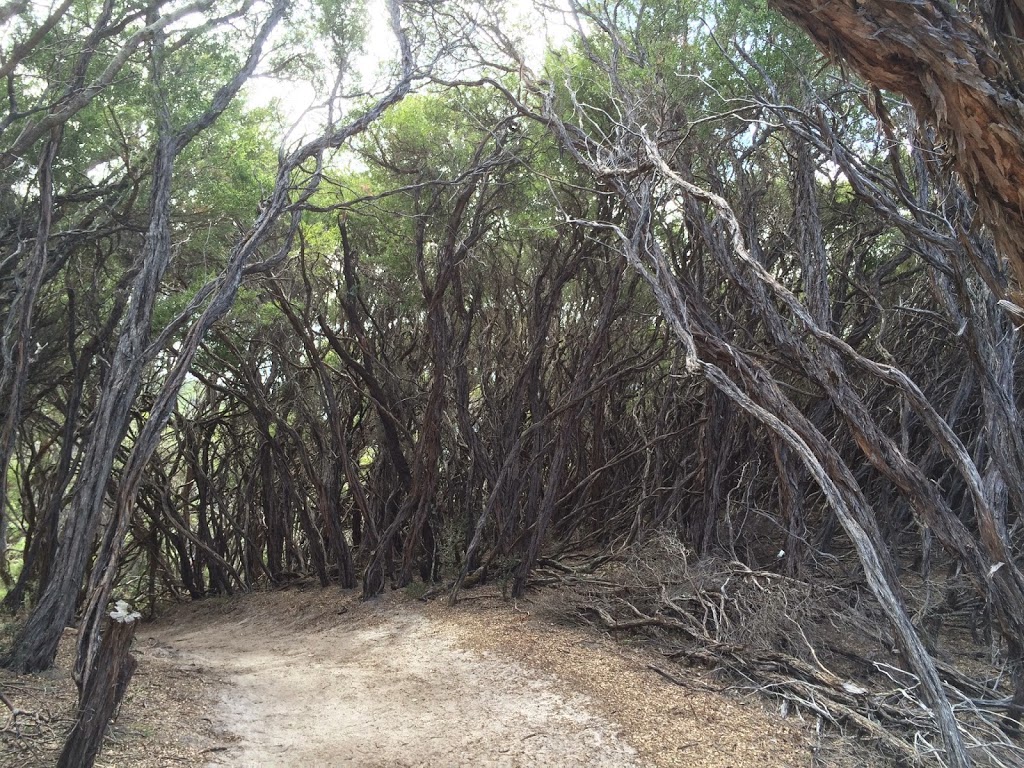 However in this area there were plenty of other choices for the discerning bushwalker; a 38km walk to the southern most point of the Prom; a walk up the cloudy Mt Oberon or check out the famous Squeaky Beach, so called because it literally squeaks underfoot with the white quartz in the sand.

The walk to Squeaky was not an easy one though, up and over a mountain pass but the view that we were treated to on the other side made the burn in our lungs worth it.
As some of you may have noticed, many of our pictures are just of Michelle and I, that is because most of the places we visit are empty: if Carlsberg made holidays….? We have arrived here out of season but at times I feel like Captain Cook: land ho!
On our return to the car, we stopped to photograph a wild wallaby chomping on the bush. 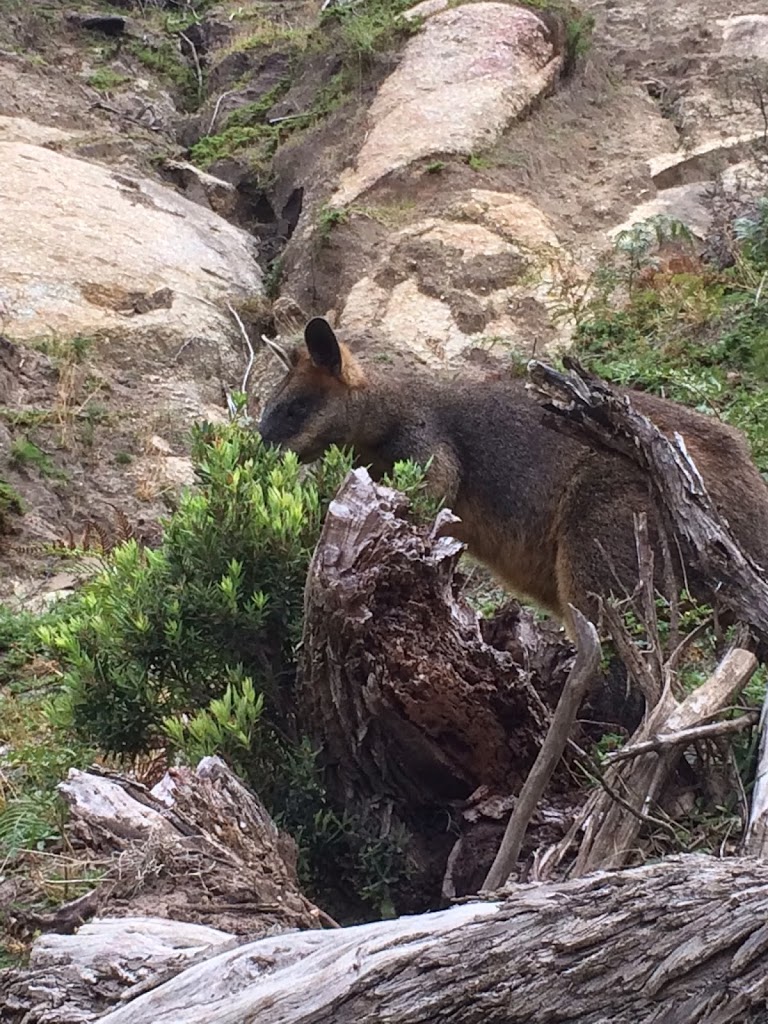 He wasn’t bothered by us at all and just went about his business.

Time to leave and head back toward the Princes Highway, our companion for all of this road trip, but first a return to Foster for a late lunch – already a favourite place of ours with lovely local cafes, a superb butcher and a very pretty main street. It was then press the pedal to the floor to be in Lakes Entrance by 8pm that night as that was the latest we could check in.
We strapped ourselves in and readied Chuggaboom 6, me as trusty Co-pilot/navigator and Michelle putting in the serious miles behind the wheel. We knew there was a serious drive ahead of us via quaint older towns like Yarram where the architecture is akin to some of our own, but mostly it was long stretches of road.
The Aussies know that the highway drags on and itself is a killer. Blimey, we can’t swim for crocs and sharks, can’t sleep for spiders, snakes and the evil, Michelle chomping sandfly; and even the drive is an exhausting one as kangaroos, wallabies and wombats can get hit by trucks and cars so your eyes are peeled the whole time for a stray animal crossing the road. Since leaving Melbourne we had seen 2 dead roos and one wallaby. To help you stay awake there are signs like ‘take a powernap’, ‘even a microsleep can kill you’ and ‘Tired? rest and revive in 2km’: every minute or so, there are reminders. Even with all of those warnings and tired as we were, the Devitts trucked on accompanied by a complete lack of decent radio stations: all they do is talk on every one! Come on Victoria, sort yourself out, no wonder people are dropping off! Where’s Smashy and Nicey when you need ’em?
As we descended into the town at the end of a drive next to the most interminable set of trees beside the road I’ve ever seen (which is why I think there are so many wake up signs!) we were finally rewarded with a view of the harbour in Lakes Entrance and the marina. Time to stop, eat a roasted chicken/pasta and then prepare for the cruise Michelle promised me the following day. I’m not a great fan of sitting on motor boats and prefer sailing to engines, so it had better be good!
Oh, and one more thing. Our hotels/motels have improved: I guess the version of cheap changes once you leave the city. Our Philip Island apartment was run by a local family and they couldn’t have been any more helpful, Foster was the same: hot showers, comfy beds and not the hint of a tram. Lovely. You can stay in Australia at bargain prices.
Oh, and one final thing. The television in Australia is very similar to our own. At the time of writing this blog former England bowler Freddie Flintoff was appearing on the Australians version of ‘I’m a celebrity get me out of here’. There was no Ant and Dec but the music, games and format were exactly the same. The crew even laughed at all of the jokes. Anyway, Freddie was holding his own but because of his cricketing background he had been voted to do most of the bush tucker trials. I think he was turning their opinion of him and had come across very well with his northern sense of humour.