Technically, this was day two of the Great Ocean Drive road trip. What stretches out before us over the next few days is the road to Sydney crossing from the state of Victoria to New South Wales and then 21 days in a Jucy Cabana in a country known as New Zealand. Now, some of you may be wondering how Michelle and I are coping being in each other’s pockets 24/7. All I can say is that I don’t think I could do this with anyone else and it would not be the amazing experience it is without her.
Brownie points now earned, I can tell you about the rest of our stay in Phillip Island and then our journey from there. First up on the agenda, was the Nobbies and a blow hole.

We drove to the very end of the island, back past the entrance to the Penguin Parade, the Chinese long deported, sorry departed, and found ourselves watching the Southern Ocean crashing in on the rocks creating the blowhole, which for neanderthals (like me) is where the sea creates a cave and then further erosion creates a fissure at the top of the cave where vapor can escape. To reach the blowhole was a short walk along a boardwalk which, with the legs we acquired in Dubai (13 miles walked in one day) we made mincemeat of.

But tell us about the Nobbies? What are they?
They, are a group of Islands which are home to Australian Fur Seals. There is an estimated 16,000 fur seals in the area but the only way to see them is through coin operated binoculars. 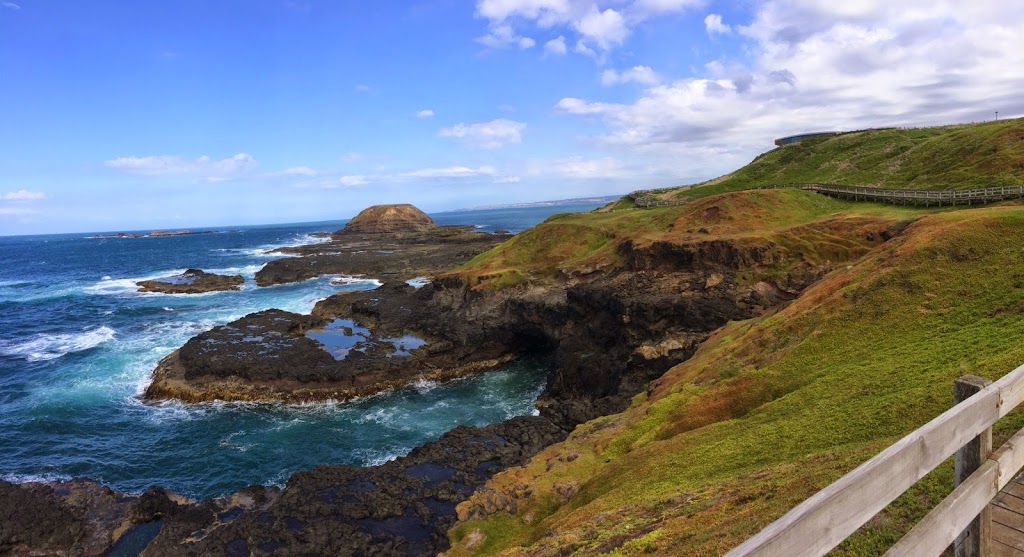 As most seals tend to lay on the beach you don’t need very long on the camera but there is also the option of a cruise out to get a closer look. This cannot be taken from this lookout though, the boats tend to set sail from Cowes. Now, where have I heard that before? We drove back in shore passing Pyramid Rock and the local Grand Prix circuit before alighting at San Remo to see the midday pelican feed.
They are another fascinating creature that ensures that when they eat a fish the head goes in first! They do this by catching their prey and then juggling them in their long beaks before being swallowed whole. As you can see from the pictures, my flirtation with nature continues as I moved closer and closer to them. What next, I hear you cry, black swans? I will try not to disappoint you dear reader.
A further unexpected treat (and a frightening one) was post feeding time. As the Pelicans couldn’t even manage a wafer thin mint after their feed, there was some fish left and our lady commentator (free show and tell at midday) told us she would be placing it into the water for the stingrays! The what? Stingrays, here? And lo’ and behold a few minutes later the beasts arrived. This wasn’t the little lad we saw on the Great Barrier Reef skimming the ocean floor, this one was the size of Babapapa! It was a behemoth, the biggest stingray I had ever seen and its tail was a sword.
We took a deep breath and took some pictures while it’s eyes searched for the fish and I bravely put my life on the line by standing behind Michelle.
Loaded with provisions from the local grocery store called Woolworths – with Jamie Oliver splashed all over the advertising – we took a drive to our next place to stay, Foster, just outside Wilsons Promontory, stopping on the way at a place called Inverloch. The sleepy town is nestled next to the Anderson inlet and with the tide out you could be tempted to cross the sand bars, but this would also involve swimming across the dangerous whirlpool eddies: the photographs do not do it justice.
After arriving at our Comfort Inn, I treated my good lady to some local steak from the butchers as the motel had gas fired barbies so that you can cook your own! Now, that’s a step up! Just before her culinary treat, we took a quick drive to Waratah Bay, a huge stretch of beach (is there any other in Ozland) where the white horsed, perfect green Southern Ocean was being hurled onto the land by the force 7 wind. Even the sand joined in as it ghosted along the surface, silent spirits splitting when it reached the human obstacle we provided. We stood head to head with the power and could almost lean into it. Almost. Sandy Point was next (both beaches an absolute must visit), just a few miles further on where we watched the surfers learning how to catch a wave; and all I could think about was, are there any sharks in there?