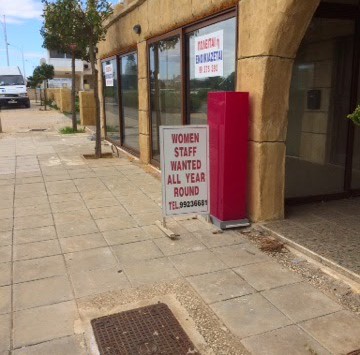 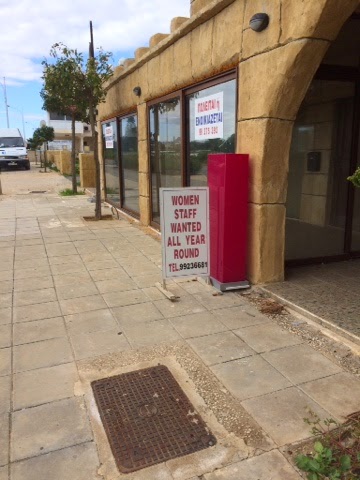 When Elton John decided to unveil his purdy wig in the early 1990’s and sing ‘the circle of life’ from The Lion King, apart from Simba’s birth, he was probably referring to everyone’s own personal round trip ticket, hence all the sobbing in the cinema when Darth Vader (oops sorry, wrong film), I mean, Mufasa, was killed by the evil Scar.
In Cyprus, life is not so different to home but there are some differences. I’ve tried to summarise my experience of them below in the potential Pulitzer Prize winning observation:
Delighted farmers in the fields burrowing away in the red mud, as their plush crops glisten in the morning dew. The local newsagents stocked with untouched print in various languages, an old, mid-sized, whiskered man is perched on a hail stained chair stolen from a garden set; his head is down buried in a story. Trucks with ‘Aylesford Newsprint’ and ‘Waitrose Essential’ blazoned on them pass by. Locals exceed the speed limit in their cars with mobile phones glued to their ears as they attempt to talk and steer at the same time. 2 men sit in their tyre garage waiting for a customer whilst playing rummy! Cashiers sit chilly in dark corner shops, the door still open: a summer habit played out in winter. There is activity everywhere but some businesses and houses are simply abandoned, rusty water leaves skid marks on peeling paint, signs are curled up at each edge like plastic fortune telling fish that used to come with Christmas crackers. Mortgages and rents are left unpaid leaving the banks to carry the debt. Brits emigrate to these places looking for that all elusive paradise, but when they just find a whole new set of problems they look for the next hop leaving behind a financial mess for others to clean up: We need poo sacks for people, bag them up and throw them in the bin.
The Circle of debt finds its way home.
I’m sure that when electronic tagging is carried out on every person that is born some of these practices will disappear. The idea that someone can be anonymous has long been the staple of Cold War spies like James Bond but implants and tracking devices could change all that. There will come a time (I’ve gone all Martin Luther King here) when all information about everyone’s personal life will be in the public domain, if it isn’t already! Privacy will be gone. Around a year ago we were shown a glimpse of the future. 4G coverage all over the UK (yeh right, could we do 3G first!) and the idea that an officer could hold up a tablet device with the camera enabled against an area to show where crimes have been committed using augmented reality apps. This idea goes all the way back to the first Terminator movie when the soon to be Governor of California scanned a person before demanding, “I need your clothes, your boots and your motorcycle.” The future hunk in Hollywood would know how much money the person had, what their family history was, and, as dramatised in the last episode of Sherlock, this information in the hands of a media mogul could be irreparably damaging.
None of this matters one jot to some of the Cypriots I mentioned in the beginning of this blog. The older set steadfastly hold onto a lifestyle that takes a peek at these things and decide their established ways are better. They drive beaten up trucks, wear clothes that simply don’t match, throw rubbish where houses haven’t been built, resist the need to welcome any strangers to their neighbourhood and will not change because they want to be like America, Greece perhaps, but not our western cousins.
However, the young people here are affecting a change. They are filling the local Costa Coffee house with their presence instead of the beaten up old bar that stays open 24/7 for the whole year! They are not prepared to be swallowed up by tradition (I’ve just thought of the song in Fiddler on the Roof). They are confident, can speak more than one language and are also, importantly, embracing technology. Universities are popping up all over the island and who knows what Cyprus will look like in twenty years.
The serious side of our travelling has kicked in now. While Taz stretches out in various places in the house our eyes are becoming square! It’s difficult to book accommodation on a budget when you have been used to fine hotels and upmarket dining darling. I feel like Winthorpe in that all time classic film ‘Trading Places’ with Eddie Murphy and Dan Akroyd, suddenly thrust into places that cockroaches think twice about because of the overcrowding! When you read reviews saying ‘would never stay here again’, you know it’s one to avoid!
Time marches on. Another icy swim in the sea this morning was followed by a healthy uphill walk back from the beach. We have been here nearly three weeks and the only thing that has upset me so far is that Chelsea seem to have taken a bit of a nosedive in the league! If that’s all I’m worrying about then life must be good! Time is of the essence in our Circle of Life and we are not prepared to waste it!
Oh, and one more thing.
If you are wondering what kind of women are required for the advert in the picture then you need to get out more! I’ve tried to tell Michelle that there’s a job for her and that it’s the reverse of being an examinations officer but she’s not having it! There’s no pleasing some people!
Hasta Mañana ’til we meet again.