Just when it’s safe to go back in the water, the Griswalds return to our story, but this does come with a happy ending. So those of you tuning in for a grisly tale of blood letting sharks and man eating crocs will be disappointed. However, if you are entertained by 2 people who just don’t know how to restrain themselves then sit back, put your feet up, invite the dog or cat onto your lap, here we go!
After our stupendous Great Barrier Reef trip, it was time to head back inland. We needed a swim without drinking half of the Coral Sea and Bahana Gorge had been recommended on TripAdvisor, but only for those with a hardy constitution: I have since found out that this doesn’t mean fat beer swillers like me. We took the road less traveled to the end of a dirt track, the air conditioning in the car betraying the real temperatures outside. After parking in the shade, we opened the doors and BOOM! In came the heat. Within seconds, our puny English, used to sub zero Maidstone bodies began to shed sweat like an internal tap had been locked in the open position.
“How much water did we bring?” I asked Michelle, and she reassured me that we had two 150 ml bottles and 2 cans of Lemon Fizz.
“Should be fine” I replied as I looked for some clouds to save our brows, and shade to stop the big yellow thing from pushing sun tan lotion into our eyes.
Hitching up my shorts and spraying on the choking sandfly repellent, I told Michelle in my best Churchillian accent that we are English, strong proud conquerors of many nations, our ancestors planted the flag of St George in many places and we can’t let ourselves, or our country down!! She told me to stop being so stupid and put on my hat.
Even with the tall trees providing some cover the humidity ate into our bodies straight away. There was only one pace we could go: laid back teenager. The sign said that the distance was 3.2 km to the top of the gorge with steep inclines at the end. Now, when tourist information contains such warnings you know it’s steep. Michelle baulked for a moment.
“I just need a moment” she said, holding her temple.
And we waited. I could tell she was weighing up whether we could make it there and more importantly, back. Meanwhile the sweat shower continued.
Decision made, a little bit of Thatcher coming out in her (the lady is not for turning) and like Hilary and Tensing all those years ago we began our ascent, Everest would be ours!
Base camp was where our car was parked and camp 1 was after 100 yards where we stopped to have a drink. Phew!
“Alright, alright, alright?” I asked Michelle in my best McConaughey.
Just a nod.
Camp 2 was a little further up where me met 2 ladies on their descent.
“Is it far?” We asked.
They gave us both a look like we had only travelled from Maidstone to Maidstone East station when we were walking to London.
“Oh yeh, a long way.” As they took sips from their 2 litre bottles of water. I glanced at our 150 ml drams and knew it was not the time to raise the point. Curiously, they both looked wetter than I expected and they said they had taken a quick dip in a swimming hole a little further up the track.
“How far?”
“About 5 minutes”
We could do that, we waved goodbye  spurred on by the thought of a cooling dip. The walk took ten minutes at our pace and just as I was about to strip to my jollies, a lady appeared, again, having been to the top. She told us she was from New Zealand and had us both smiling immediately putting what we were attempting into context with her bubbly character and interest in what we were doing. She took our picture on our phone and when she jumped in to cool off we reciprocated the favour on her phone. She told us that it was steep and that this swimming hole was her reward for having made the top.
“Can we not swim up there then?”
“I wouldn’t.” She smiled again. “The torrential rain has made the gorges full of water. It can be very dangerous.”
Danger. Yes, give me some more of that!
We set off again, and it was only after about 20 minutes that we realised we had forgotten to swim at the hole. Both 150 ml bottles were now gone and like a teenager in freshers week blowing their yearly budget in one night, the only fluid we had left was in the form of lemon fizz. But we wouldn’t give up. The climbs were steeper, the shade giving way to the blinding heat searing our flesh like a burger added to a barby.
“It’s just over the next one, I reckon.” Trying to keep spirits up but dowsing them with reality only a few moments later when there was indeed no sign of the gorge or the end! Beside us all the way was a long water pipe.

Cairns whole supply comes from this source and the pipe was our guide to the top.

Eventually, virtually on our knees, we completed our ascent having attempted a run at one point to show how unfit we were.

Now, we had the task of finding a way down to the waters edge but not before we refilled the 150mls with fresh water flowing out of the pipes. I looked through the trees and made out some lads jumping into the swirling water. There were people swimming? Surely, we could too. 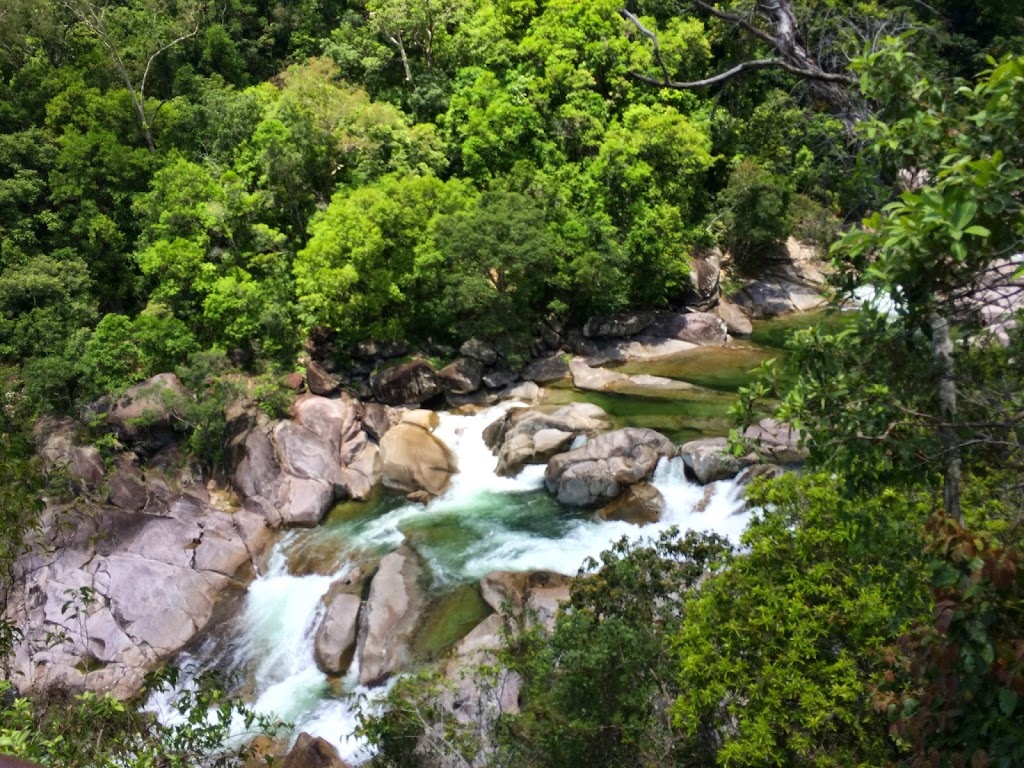 Behind us, a man with blonde dreadlocks and his girlfriend descended to the waters edge and like the expert climbers that we are, we slid down on our bums behind them. The lads were up ahead doing things that would induce a cardiac arrest in their mothers – leaping from 30 feet into the abyss – and our dreadlocked older friend soon joined them as they traded in a life of their nine lives with each leap.
As for our swimming. Yes, we dipped, yes we swam, about three strokes to a rock, the current under our feet a reminder of the power of water. Some may say we were wimpy and when an Aussie turned up with dog and they both swam much further than we did, side by side, in perfect harmony our entry into the cowardly Custer club was confirmed. So much for ‘ Cry Harry blah blah blah’. Beaten by a dog! Taz will be placing a bag on his head in shame when he hears about this in Cyprus and asking for permanent adoption by Mick and Dee! Sorry Taz, but let’s face it you’re not exactly the pup we bargained for either (he’s scared of the Hoover).
The journey back was much better and you may wonder whether it was worth it? Yes, it certainly was. The water was bootiful, the scenery incredible (a blue butterfly landing on our towel on the way down) and we shared it with a blessed few. 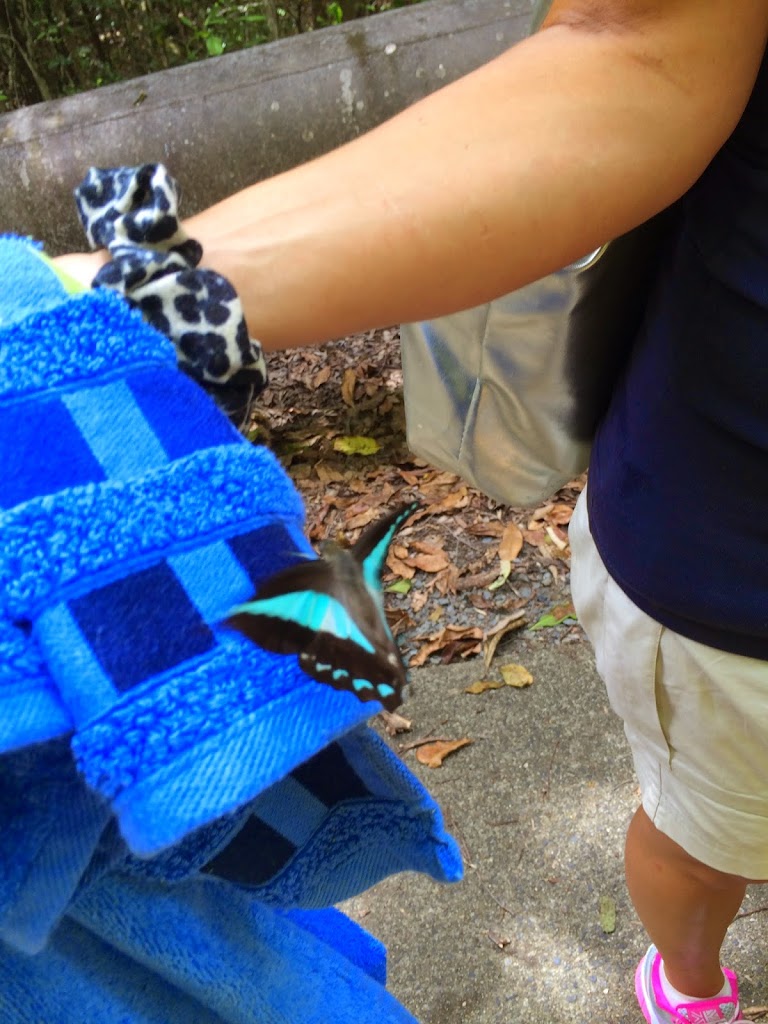 The whole experience took 4 hours giving us time to tick another box at Babinda Boulders, another swim hole, which was pretty busy when we arrived.

Back to Cairns and a stroll along the esplanade next to the free outdoor swimming pool lagoon. 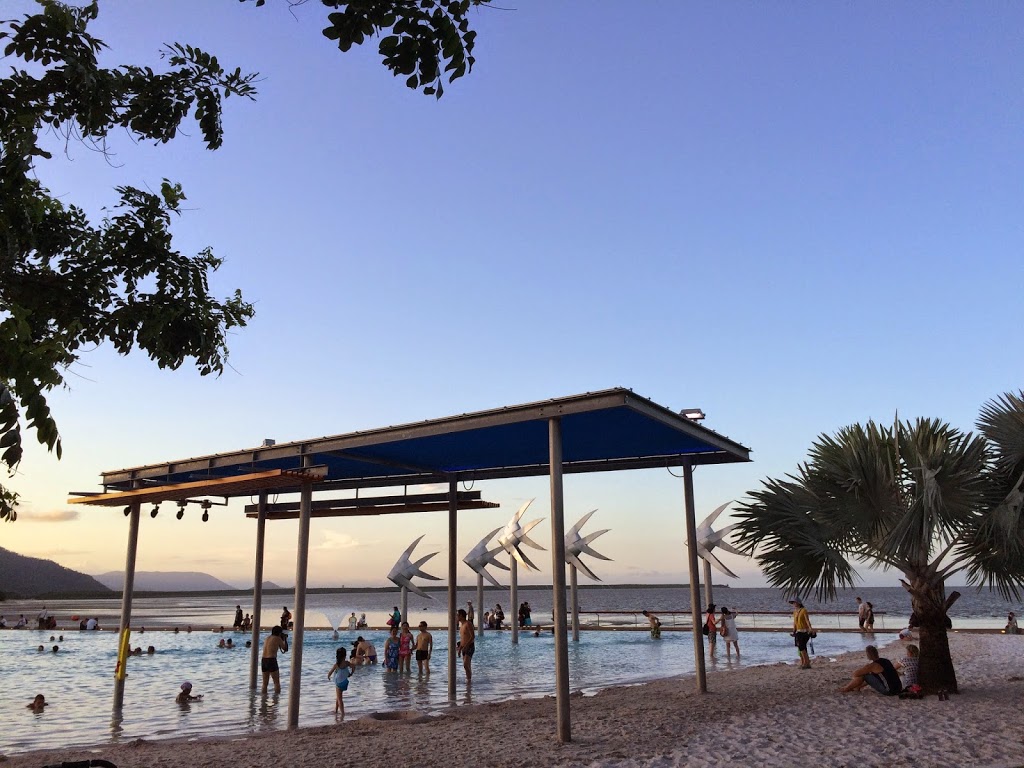 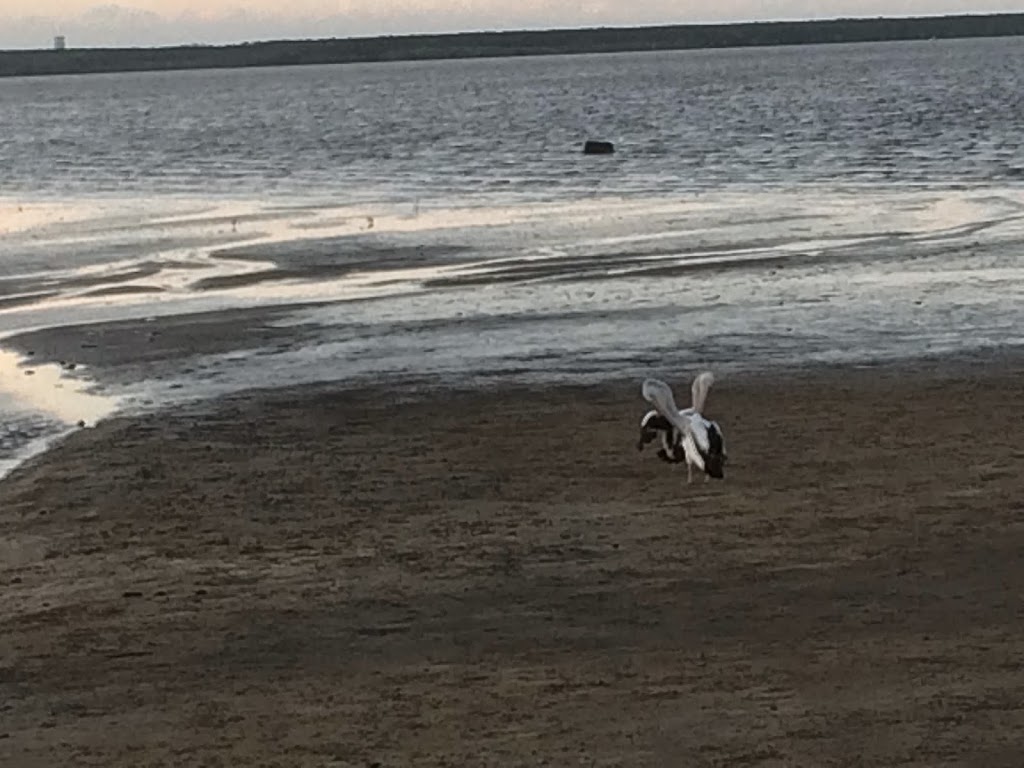 only to be stopped and breathalysed by a local Bobby! 47 years, never blown into the tube and luckily I had only drunk one bottle of Singha.