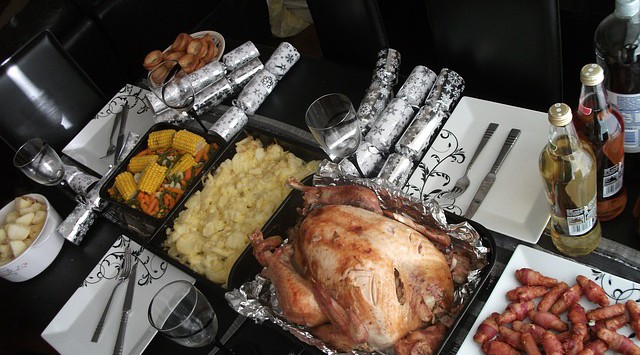 No, the title of this blog is not a reference to Arsenal’s transfer targets or those that are following the UKIP parties Twitter feed. It is how many birds we consume at Christmas in the UK. Did you also know how the bird came to be our national Yuletide main course? It started with Henry the V111 when the bird associated with something rubbish (see Arsenal quote above) became a luxury enjoyed by kings. After refrigerators became more widely available in the 1950’s, turkeys started to look over their shoulder at the farmers looking to profit from their succulent white flesh.
In Cyprus. the stuffed turkey is just one of the dishes served for Christmas dinner but still competes with traditional Greek fare like ‘Souvla’ which is a large skewer of meat (either pork or lamb) slow cooked over a charcoal barbecue. I’ve eaten Souvla before and I can tell you it knocks spots off my pathetic efforts to cook a few Tesco blue stripe Chicken Breasts in the summer. Those of you that remember Crocodile Dundee’s knife comparison will get some idea of what I’m referring to: “that’s not a barbecue!!”
One of the other things I’ve noticed since we landed is how much more cosmopolitan Cyprus now is, but that is only because, like us, the Eastern Europeans have left their homes and settled here. There are also British influences everywhere , the ex-pat community is strong and is mostly made up of the 55 plus generation or their offspring trying to make a living in a land where haggling is refreshingly vibrant!
Michelle’s cousin, Graham (or Mr G, or DJ John Lime – he has more indentities than Jason Bourne) is one of those people integrated into the culture here. He lives in the same town where we are staying and spends much of his time playing gigs and offering IT services to those in need. We attended one of his shows the other night, a special acoustic set, and were treated to such classics as ‘Wish You Were Here’ (no, this has nothing to do with Judith Chalmers) by Pink Floyd and ‘That’s Entertainment’ by the Jam. The show was interactive with percussion instruments handed out to the audience. I reluctantly took the bongos and treated the 8 or so people around our table to a feast of rhythmic beats not seen since Lady Black Mambaza last played a concert! It was a great night and if I tell you that Michelle, at 45 (old bird that she is) was the youngest in the audience, this will give you some idea of the senior citizens he was trying to sell his show to at this time of year. He gave it his all and there was not a dry eye in the house (in G’s case, a wet T-shirt) when he finished with ‘I don’t want to talk about it’ by Rod Stewart.
We also met Grays (yep, another name) singing partner, Natalie, at a Boxing Day dinner. She and her partner Mark came over here 7 years ago not knowing anything about the country and she has established herself throughout the southern half of the island with a magazine she started called Daxi. Each year, she hands out awards to deserving businesses at a ceremony she organises and runs. I get the feeling life here is non-stop for her as she also sings with Big G (that’s four names and counting) in their band ‘Echo’. The first year she ran the awards, there was a reserved response by the community leaders but now each Mayor ensures it is in their calendar to attend. Not only does she run the show, she also advises others on how to put together such events in the more industrialised parts of the island like its capital, Nicosia.
For those avid readers of the blog, our lost suitcase has escaped from Milan’s international hub and is now huddled with our Greek cousins in Athens! It now needs to learn how to swim!
And one more thing! Well, two things. Two more campaigns actually.
1) Christmas songs should only be played in shops from the beginning of December.
2) As soon as Boxing Day is done , there should be no more Wham, Jona Lewie or bloody Paul Mcartney played anywhere until the following December!
Got it!
May 2015 bless you with a lottery win, the grace to share some of it with your friends and the cleverness to not leave a forwarding address!
Stay tuned for my next Blog – ‘A Dog is for Christmas and Not For Life!’ Coming soon.