What a difference a night makes. It was a chilly start and we had a few chores to complete before making our way to pick up our lunchtime ferry. Things that many people creating itineraries overlook are the smallest details like keeping the camper clean. We had put up with the Jucy for the first few days in its ‘boys bedroom after a month’ state and finally cracked taking a trip to a local BP to clean it out. There was also the small matter of food for the van!
We did find time to find another bay (where vans were parked on the beach) to watch the sea for half an hour and ended up leaving pretty quickly because of the evil sandflies. They had time to bite us a couple of times each before we left though. By the time all this was complete, the sun was out and we were in the queue for the ferry.
So let me tell you about the Interislander. When you look at the pictures of the ferry it is cruising through the Cook Straight from North to South Island in bright sunlight, it’s white paint gleaming and shiny. The boat that arrived to take across to the south didn’t quite look the same. It wasn’t a disaster but let’s just say the advertising had as much photoshopping as some of our older famous celebrities get these days. Bizarrely, having already gone through a gate (100 metres behind us) where a man issued us with a boarding pass, another man waved each lane on taking a ticket for each car.
“This is hardly P&O” I cried.
“Why don’t they just have boarding passes in the window like we do at home?”
Mmmm, touch of the Meldrews coming out in me there!
This was only exacerbated as we then found out the ferry only has one entrance and exit!
“I don’t believe it!”
When each vehicle enters the boat they have to circle around to face the other way!
Once on deck, I looked across at the docked cruise liner Sea Princess and thought that she looked like a very fine ship. Our ferry improved its standing by offering a cinema for those that may want to spend the trip catching a film but Michelle and I picked a spot on the top deck in the sunshine determined to enjoy the best ferry crossing in the world! There was plenty of seating and we changed our spot a couple of times to enjoy the sunshine but escape from the wind.
Now, for anyone thinking about making this trip, the ferry ride is over 3 hours long and I thought that this was because of the distance and not because the ferry travels at a pace akin to a Sinclair C5! It took an eternity to clear the coastline and then as you are looking behind at the way the clouds just hang themselves like grey washing over the headland, 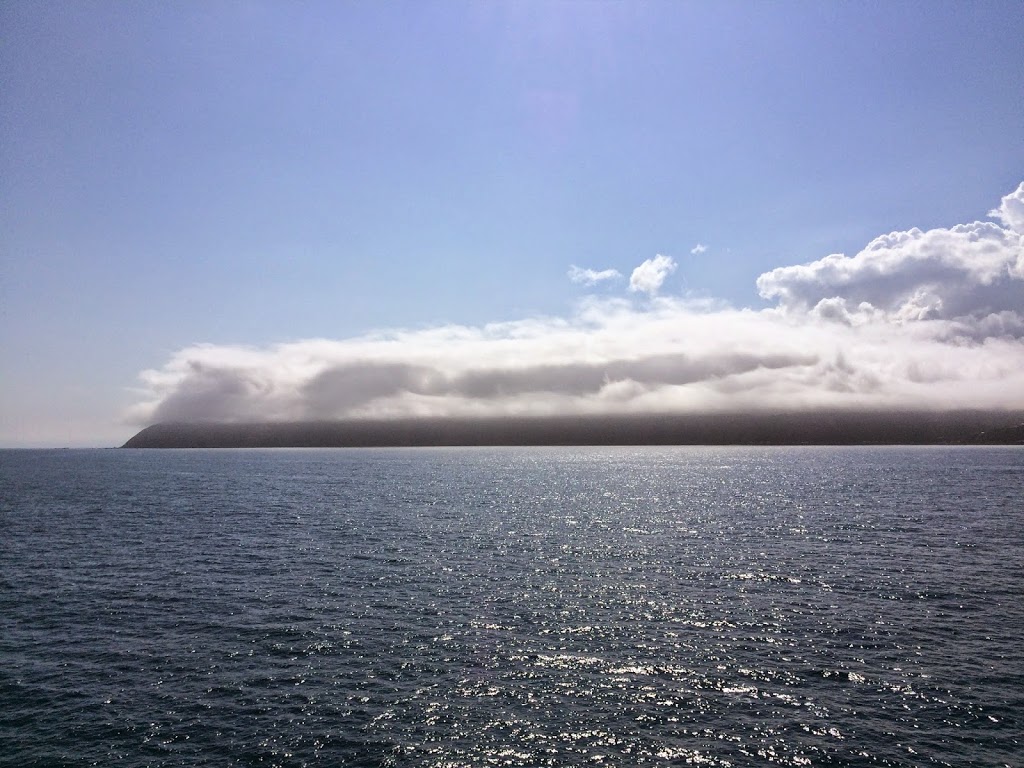 you look forward and the South Island is only a few heartbeats away. The last hour of the journey lived up to all the hype and the slow pace suited the cruising atmosphere.

The entrance to Marlborough Sound was simply breathtaking, it reminded me of the film ‘Jason and the Argonauts’ when the ship sails between the two islands into a new world. 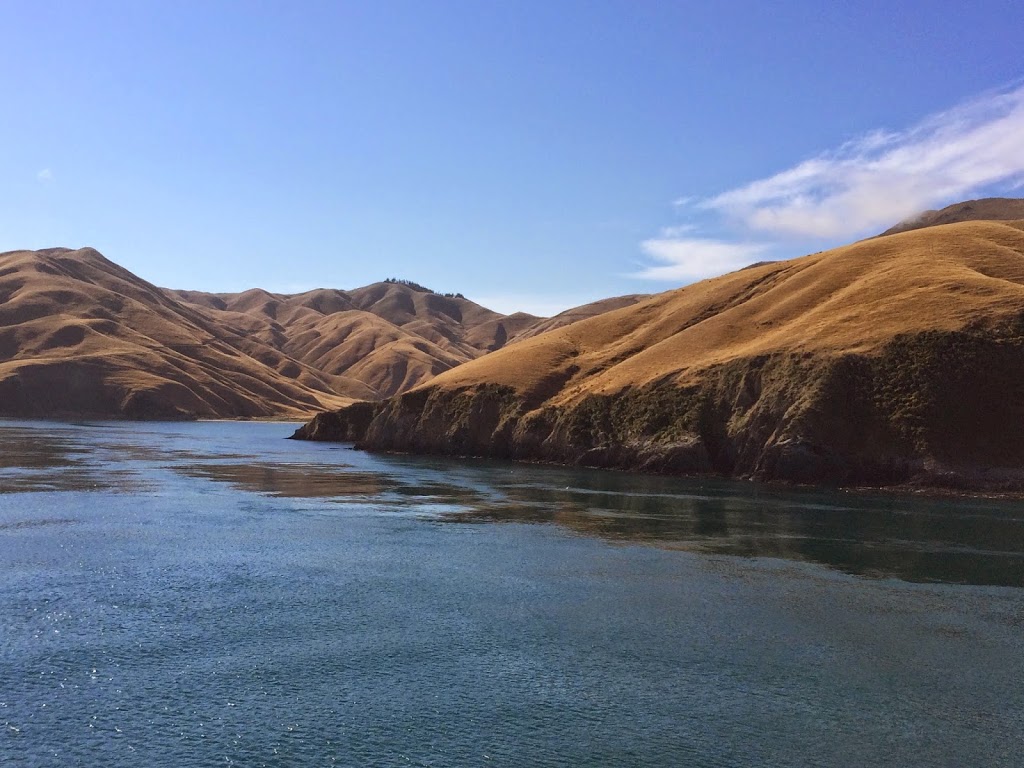 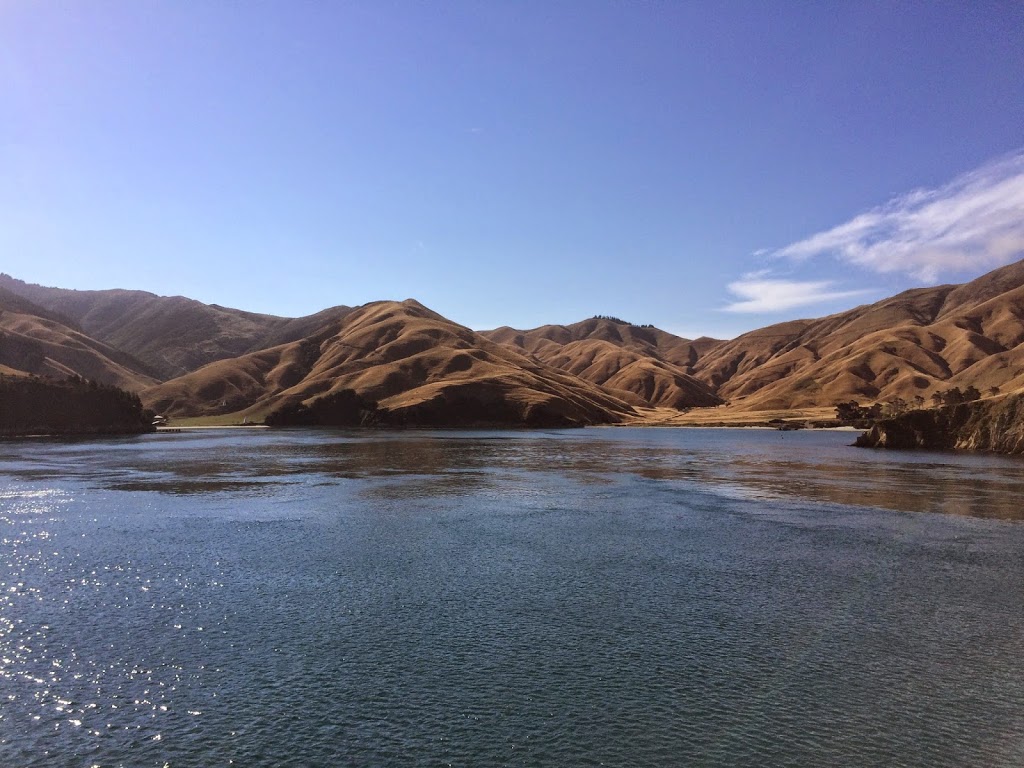 The cliffs were all velvet green smooth formations bathing in the afternoon sun. As the ship ooched further in, we had time to take pictures of the isolated small cabin houses that had been built on the waters edge. This was like visiting a forbidden, uninhabited world, already a contrast to the north and our ferry crept silently through the narrow passageway, past little beaches and jettys where only boats could moor for the day (there was no road access) and then up as high as your neck could stretch to the trees covering the huge mountains. 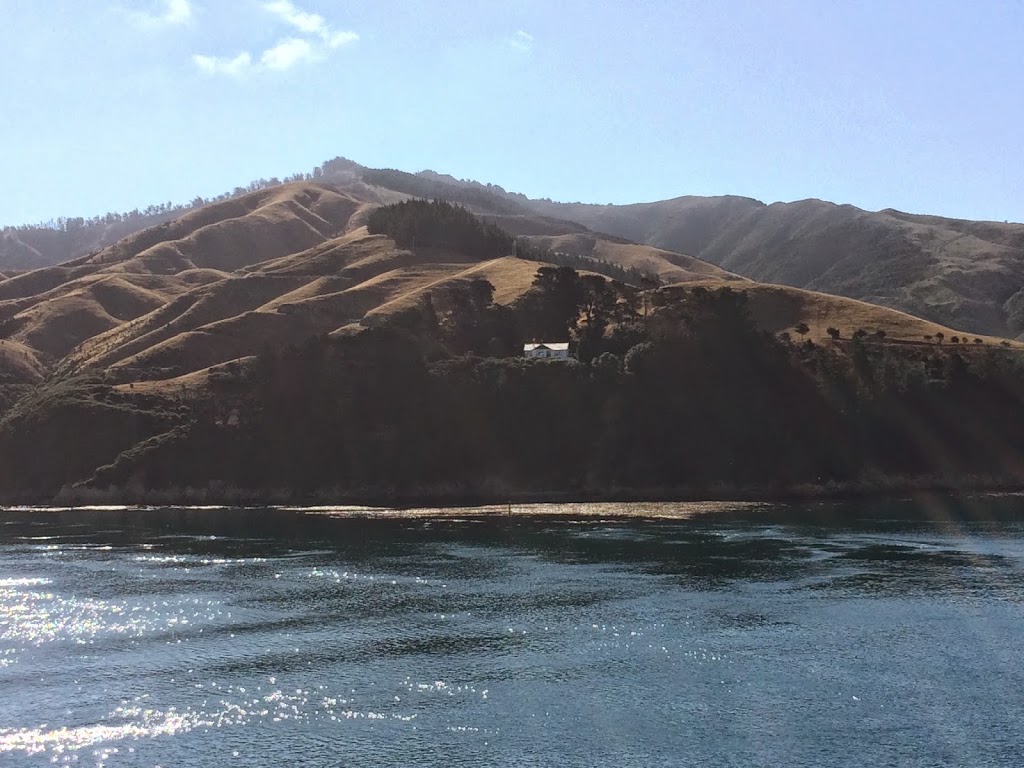 We moved forward to the front of the boat and watched the sun bathing the lake as a couple of dinghies created black shadows on the water. 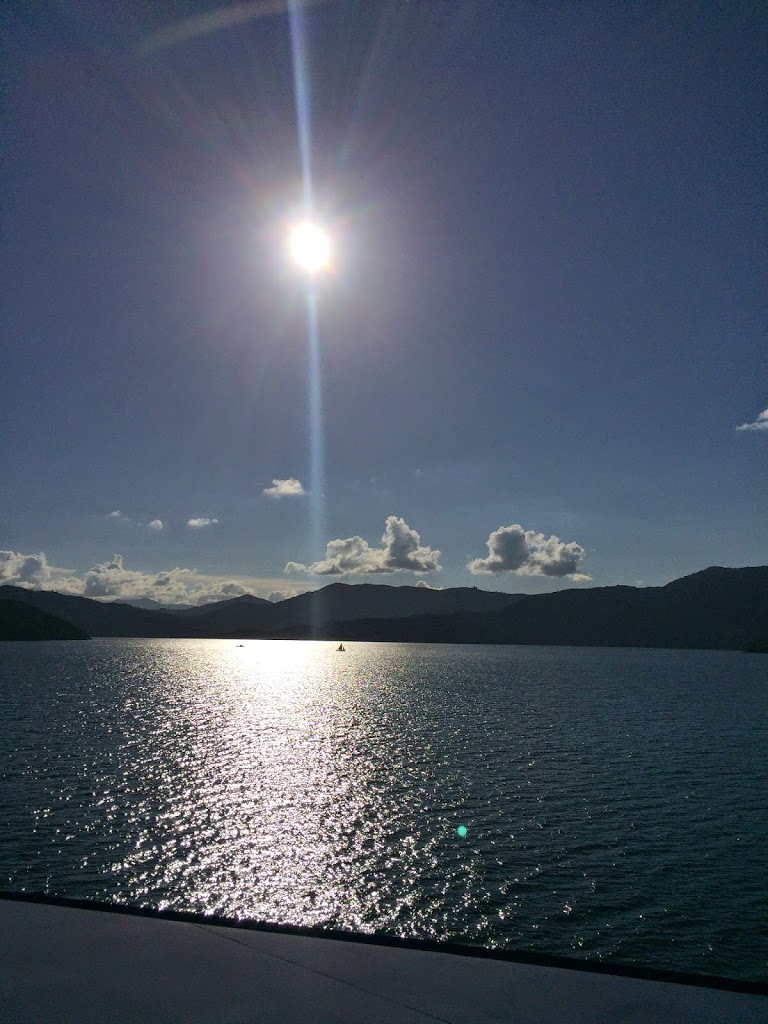 The sea was calm and we didn’t want the trip to end. We realised that P&O wouldn’t perhaps approach this in the same way. This was a cruise, a slow sailing that melts its way into your heart, and the speed allows you to savour it! It truly is the best crossing in the world!
Finally, we docked in Picton (the gateway to the South Island), the ferry having to perform a quick 180 degree turn to make its mooring and at 6.00 pm we were soon on the road to Cable Bay, about 20k north of Nelson where we hoped to wake up to the ocean. It has not been a habit of ours to arrive at camp sites late but we had a 2 hour plus drive to do and thanks to Laura’s advice not to take the treacherous coastal route, at 8.30 that night having ascended and descended a number of mountains and driven up a small windy track, we found our destination. Our fingers were crossed for some decent showers, a clean kitchen and that all important wave breaking sea to send us to sleep.