We had debated it for weeks and now it was decision time.
There was the option to hike 20km along a gravel track to the famous Mt Ngauruhoe which was a stunt double for Mount Doom in the Lord Of the Rings films, take a tour of Lake Taupo or head to Wellington and explore the capital city. We felt fit enough for the trek but decided we would only be bold if the weather held up, and when a huge black cloud hid Tongariro National park from view first thing in the morning, the cowards came out in us and we decided to head to Wellington; the lake was also looking now like a dull option.
The road to the capital began to show us the promise of the South Island or southland as it is known. On our right was a huge mountain called Mount Ruapehu (an active volcano – last eruption in 2007) and prompted us to stop and take some pictures. Set against the backdrop of flat auburn and indigo fields this sight was easily the highest peak we had seen so far. I have since found out that some of the scenes from Lord of the Rings were also filmed here: our legs thanked us for saving them from the 20km walk. This area, (the Waiouru region) is also in an army training area and there were signs warning us to stay away from the fields in case of missile or gun fire. I tried a number of times to encourage Michelle to get closer to the mountain to take a better photograph but for some reason she declined.
Around 3 hours later and just before we approached the outskirts of Wellington, we dropped into a secluded bay (Pukerua) for a coke and to just inhale the sea air.

We looked around us and began the ‘could you live here conversation’ which always ends with one conclusion: Australia. The reason for this is the weather. Wherever there is sun you will find Michelle, no question. But on this day, at this moment, New Zealand was pretty amazing. Look at us being fussy now!

Into Wellington via the motorway, past the stadium 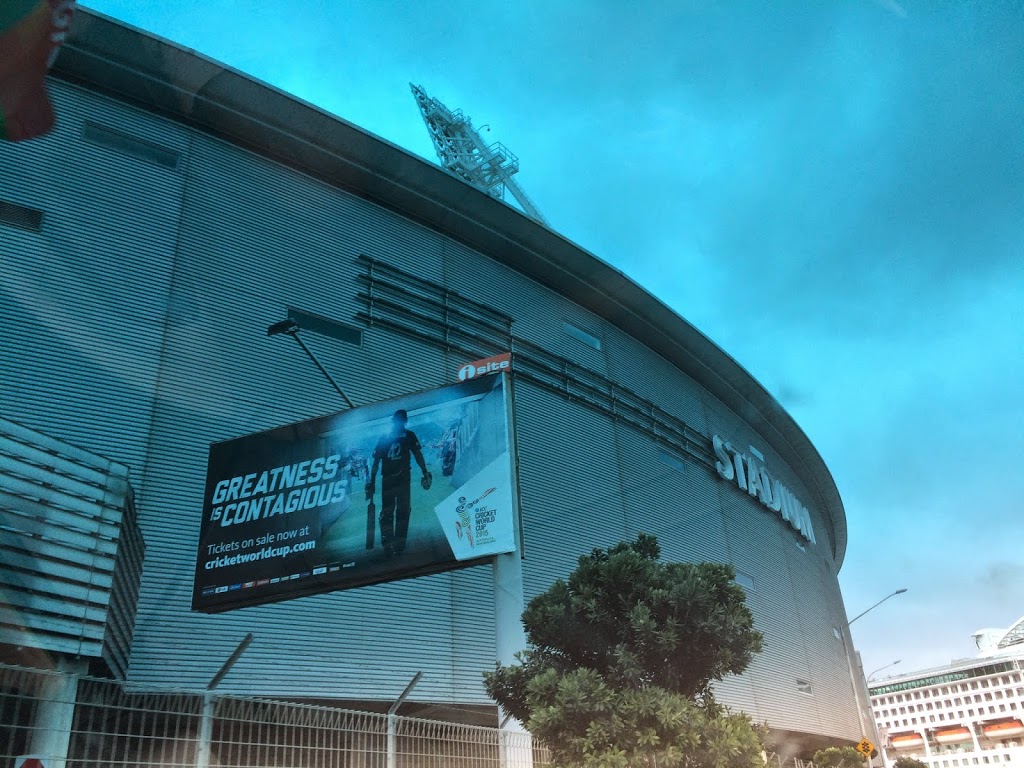 and in a similar way to Auckland the ability to sail straight through if required. We took a left towards the quay and attempted to find the cable car.

“Look out for some wires.” I said to Michelle having not done any research into what kind of cable car was in the nations capital.
“I can’t see any.”
“OK, let’s Google the address and let maps take us there.”
A few minutes later and we were still no wiser.
“Perhaps, the trams are cable cars,” Michelle offered, and when you are in the middle of a city going round and round you’ll hang on to any theory, no matter how unrealistic. Then, I saw a sign. ‘Cable car’ with an arrow pointing to the same spot Google had taken us to earlier, but alas no wires. Little did we know that this was an old fashioned cable car like the one in Hastings, UK! We only found that out later on when we successfully managed to make our way to the Peter Jackson statue which is not in fact a statue of Peter Jackson but a tripod named in the honour of WETA who created the digital effects for the Lord of the Rings films. Confused? So were we.

The idea of finding the statue was to eat a Pizza in an Italian restaurant recommended to us. Well, we found the tripod thought it was the wrong statue and then made our way all the way to tourist information in the heart of town (who we should have visited in the first place) and they told us that the famous Italian was next to the Tripod where we had just come from! Gaaaaaahhhh!

Clearly, we need to read our hints and tips guide better!
That was a final straw after a long journey only slightly saved by having a Wagamamas that overlooked the bay on the quay. Another woeful campsite (that city thing again) followed and it seemed our good luck had left us temporarily. Well, it wasn’t going to be sunshine all the way was it? Life just isn’t like that.