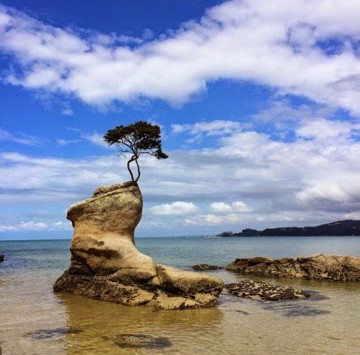 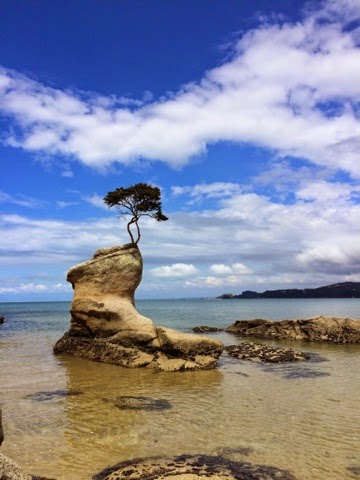 I thought it was going to be a day when I put my old blue jeans on. We had been warned, the South Island was going to be colder. In fact, so far, we had been very lucky with the weather but we had seen a much chillier night in Wellington so it only made logical sense that we may be delving into our suitcases to find those rain jackets and jerseys we had packed so many weeks ago and had been hawled with all their extra weight around a country where the average temperature was in the 30’s!

It almost feels like a failure to be wearing so many layers on this kind of travels and then of course the irony that the UK may just be warmer than where we were was not lost on us. We could hear the sniggers 18,000 kilometres away.
Our morning started early. We were determined to see a sunrise over the beach and threw on our scruffs and headed the 50 metres to where the waves were enjoying a quiet lap. Looking up, there were a few gaps in the clouds but instead of that wonderful blue background there was only more grey. A gap appeared in the sky that just reminded me of one of the volcanic craters from Waimangu. 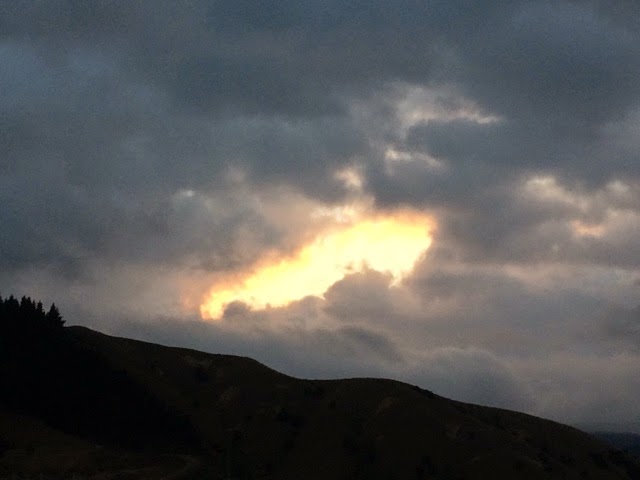 Was this the only sun we would see today?
Well, I needed to be patient. Only 2 hours later as we headed through Nelson bound for Abel Tasman National Park the whole coast was wall to wall sunshine, the clouds now an open blind. Today’s trip was one of those days when we would see the same road twice, which as anyone knows means that the drive had better be worth it! We were now both very familiar with the driving habits of New Zealanders and to be honest, pound for pound, our own roads are littered with far more maniacs! We seemed to be making good time, that is until the last 10km which wound up a mountainside and then dropped as steeply into a bay where the tide was so far out you couldn’t imagine it flooding. A few large keel boats sat lopsided and exposed to the elements on the sand waiting for the water to revive them. 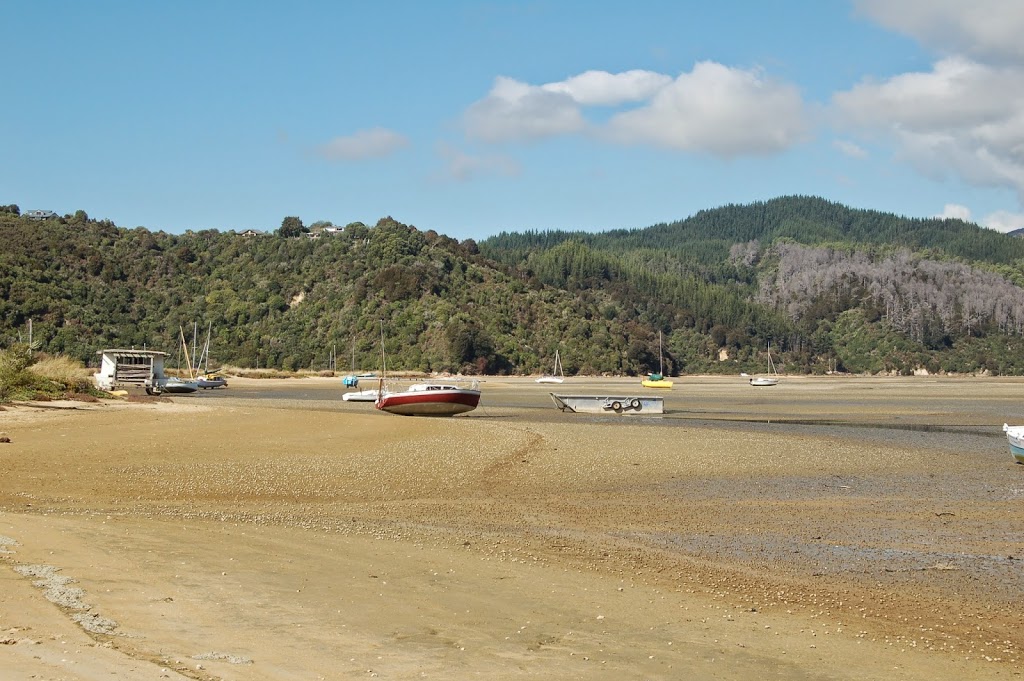 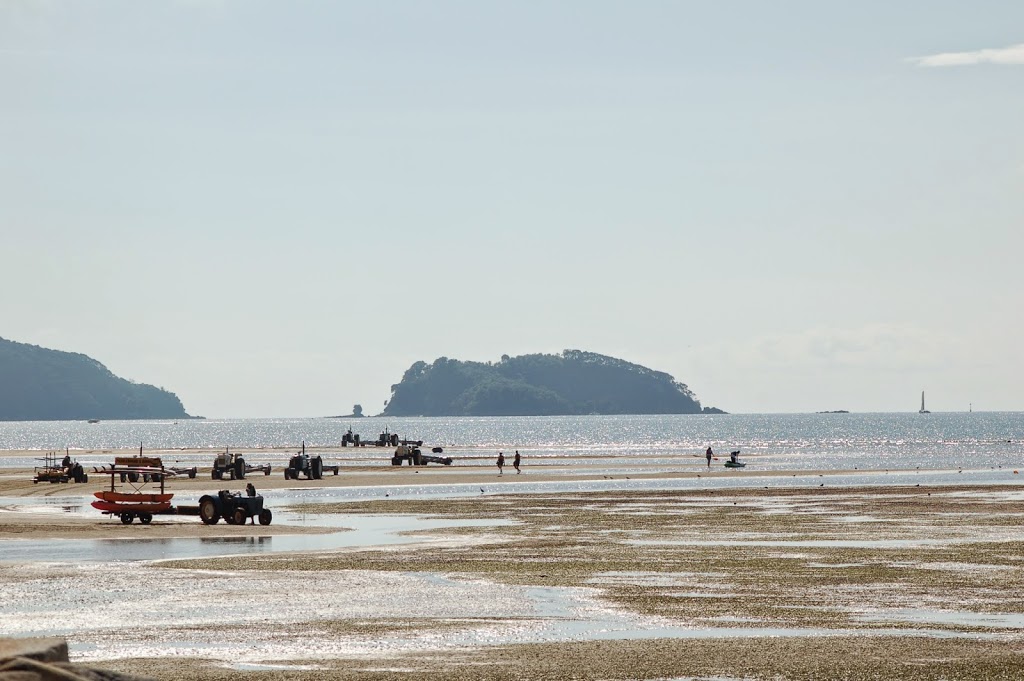 We parked the Cabana and noticed a whole line of trailers sitting on the sand just where the sea had ebbed to. In the closest bay where there was significant water there were two boats but I couldn’t imagine they would be coming ashore. We continued on and became stuck behind a car with a small, old enclosed speed boat on the back, all with the passengers inside and then it became apparent what happens here: the people actually never get off the boat, the trailers on the beach transport the boat with the people still inside back to their cars: they were Aqua taxis. Very novel!

We parked the Cabana in a car park in Abel Tasman National Park, which was the end of the road and having packed the bag ready for a walk, came up with the idea that it may be a good idea to kayak here. We could see Adele Island rolling in the deep just off the shore and thought that we could park a kayak there and explore. 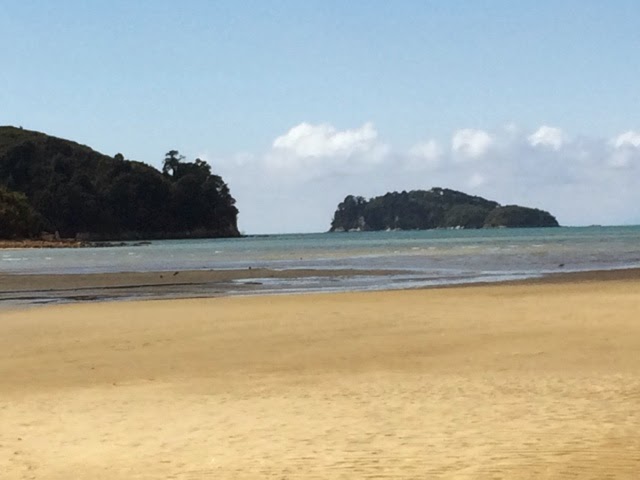 Half an hour later we were back in the same place having been discouraged by the company back in town who told us that the expense would not warrant the time we would get in them. Very honest, we thought. We calculated the round trip hike and promised ourselves the reward of a pizza at the wonderful looking cafe that sat right next to the entrance to the park.
The walk itself was worth the effort as we ducked in and out of secluded coves with the sun full in our faces. I think we both agreed that the experience would have been even better though in a kayak and marks a small regret in our diary.
After returning to the cafe some 2 and half hours later, we found that pizza was not served until 4 and we would be denied that pleasure. However, we opted for a beef lasagne  that was on the menu and enjoyed one of the best meals of the entire trip so far! 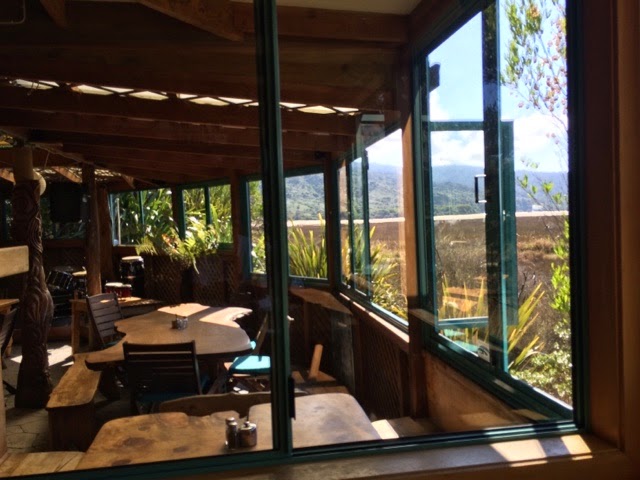 Now for a drive. On the map it looked reasonable, on the road it was a killer: 4-5 hours, and at the end a drama unfolded we would not forget.
Punakaiki is the home of the Pancake Rocks, a unique formation and tourist attraction we had picked out whilst planning the trip. To get there involved driving through a beautiful but deadly rain cloud; a narrow mountain pass soon turned into a death trap. The black downpour confused me as co-pilot and trying to work out the distance to our camp was not easy. I was deceived by the rock formation that I thought was our campsite and thought about turning back which on a cliff edge in wet conditions is not easy. As the rain subsided leaving an slippery covering on the uneven tarmac we saw a sight every parent dreads. A half capsized happy campers’ camper van was being cordoned off by green ‘Police, do not cross’ tape and examined by the first set of constabulary we had seen in ages; and on the opposite side of the road was a mixture of wet discarded clothing and the remnants of 2 motorcycles with the handlebars reversed like they always seem to do in an accident. Luckily for us we didn’t have to turn around and see it twice, the actual town of Punakaiki was further on. The man on reception at the campsite told us that New Zealand is blighted with people who forget that they drive on the left. Apparently, the camper van turned onto the road on the right hand side and met the motorcycles head on as they came around the tight set of bends.
The clouds hung over us that night, as if they had followed us from our dawn in Cable Bay and we fell off to sleep hoping the bikers survived and that the occupants of the camper van weren’t going to be scarred for life. Let’s face it, driving on the wrong side is so easily done.