Up feeling like I was King of the camp this morning. Everyone else was leaving, such is the life of a traveller!

Breakfast was woofed down and we soon found ourselves harbour side waiting for the passenger ferry across to Russell Island. The weather was a little overcast but still warm and the day promised to be another corker. We were advised by tourist information (iSite in NZ – and they are extremely helpful) that we would not need the car as the island is so small plus the return cost would be very expensive compared to the charge for 2 foot passengers. The ferry crossing took around 20 minutes and was very pleasant. I could see fleet sailing in the bay and it looked like my old dinghy, the Laser, as the boat of choice. We docked and had other plans for our day so Michelle told me to shimmy.

The walk we had found on our local map (all iSite tourist information has local maps and they are absolutely vital) would take us to the very end of the island to Tapeka Point via a scenic lookout called Flagstaff. It was an arduous climb to just make it to Flagstaff but we passed some very fine houses built on the hillside overlooking the harbour. When we reached Flagstaff we read about our British ancestors again and the peace treaty between them and the Maoris.

The Flagstaff itself had been erected by the British and torn down by the Maoris 4 times before a permanent peace could be agreed. The view of the Bay of Islands from this point made the vertical steep climb worth it and this has been a feature of this holiday, the best sights equal pain!

There was still about 1.5km to the end of the island though, which looked like we may have to take by road, but as we began our descent into the village there was an arrow pointing to the right with the words ‘Jim’s Walkway’ on it designed to get walkers off the road and give them a safer path into the village. I was very impressed that my brother-in-law, Jim, had provided us with these kind of benefits from the comfort of his sofa all the way from England!

The track wound its way all the way down to the main crossroads in this tiny place. The beach lay both to our left and our right and we investigated both: the left had the edge! Just. 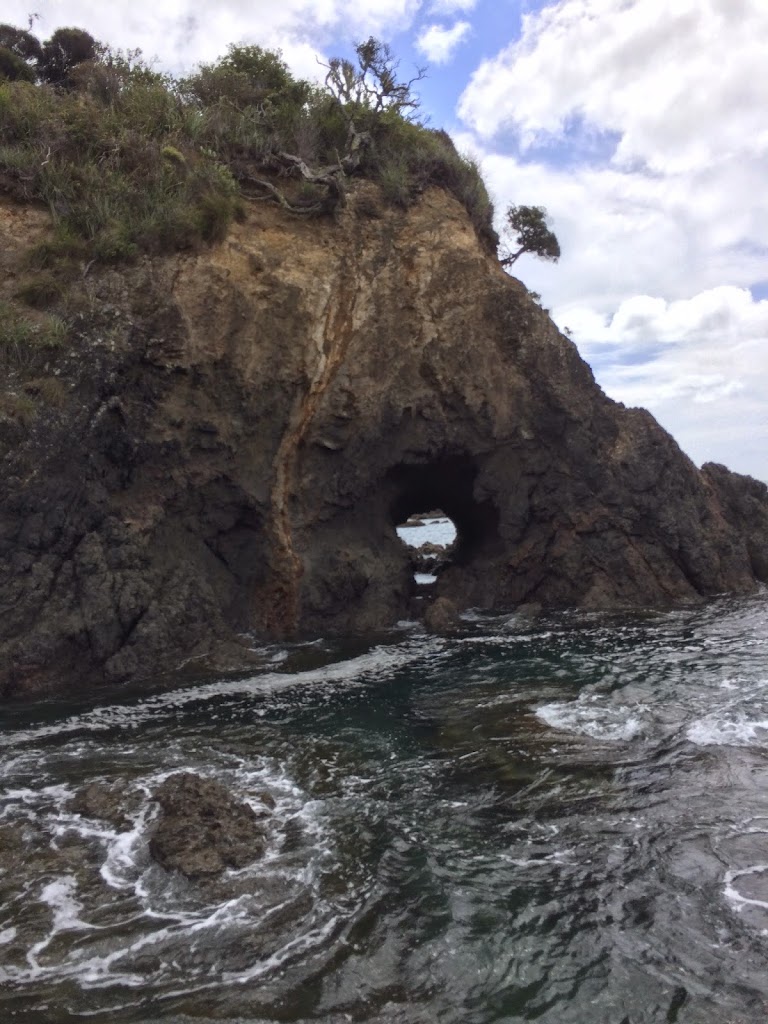 We sat here for a few minutes remembering to draw all these incredible views and feelings into our memory banks whilst taking pictures to stimulate those brain cells in our old age.
All too soon, we headed back to the quay where a number of teenage boys and girls were throwing themselves into the sea. We had a date with Doubtless Bay and we weren’t going to be late!

Tomato Soup in the camper van first though right next to the beach in Pahia.

Coopers Beach in Doubtless Bay was just over an hour north. We had not planned this in our itinerary but it had been recommended the previous night by one of our fellow campers.

Far north New Zealand has no sharks, no box jellyfish and no saltwater crocs but it is a cold sea and beautifully green. The beach was reminiscent of Kewarra in Cairns where trees meet the ocean.

Further north is Cape Reinga which is as far as you can go but we circled round via Kaitaia and began our journey south. From here on we are bound for the southern most part of the mainland world.The Ngawha PoolsAt 7.30 that evening we had almost arrived back at camp but first, in another change to our original plans we made for Ngawha spa and volcanic thermal pools.Each Pool had different temperatures and as we changed into our swim wear we sized up which one was for us. For example the ‘Twin’ is good for general aches and pains but you could opt for the ‘Scotsman’ which is for rashes and skin complaints!

All the pools help stimulate the blood and lymphatic system: the cost here was 5 dollars each to use the facility. There were a few people here but mostly the older generation.

We started slowly in a pool that was 39 degrees Celsius as a fleeting shower arrived to accompany our early evening bathing. Already in the pool was a young woman, her eyes closed allowing the murky soothing warmth to flow through her. She opened her eyes, smiled and began to pick up clumps of mud from the pools bottom and rub it all over her skin. She told us that the black mud exfoliates the skin so we began plastering ourselves with the stuff. If only you could see us. She spoke very softly in her New Zealand accent and revealed that for a living she helped people’s bodies heal. She also travelled and was only here temporarily re-acquainting herself with her family and country again. I wondered if I would get in a bath in the UK and do the same? I concluded that I didn’t have that same sense of the spiritual side of life, it was great to meet someone that did though.
There was one pool that was a bubbling 47 degrees and I dipped my toe and thought, nah! Even asbestos skinned Michelle thought it was too hot for her but our new temporary friend immersed her body the whole way! It was the equivalent of walking on nails. Trying to wash the sulphur from our bodies afterwards was tricky though as the showers were beyond abysmal but maybe that’s the point, why shower afterwards?

Returning to our camp late we came across a number of New Zealanders huddled around the TV in the lounge.”What are you watching?” we asked.
“Corro.” came the reply. They were watching Coronation Street all the way across the world and they were loving it!!
Michelle and I gave each other a look and laughed. The world is an even smaller place than we thought.