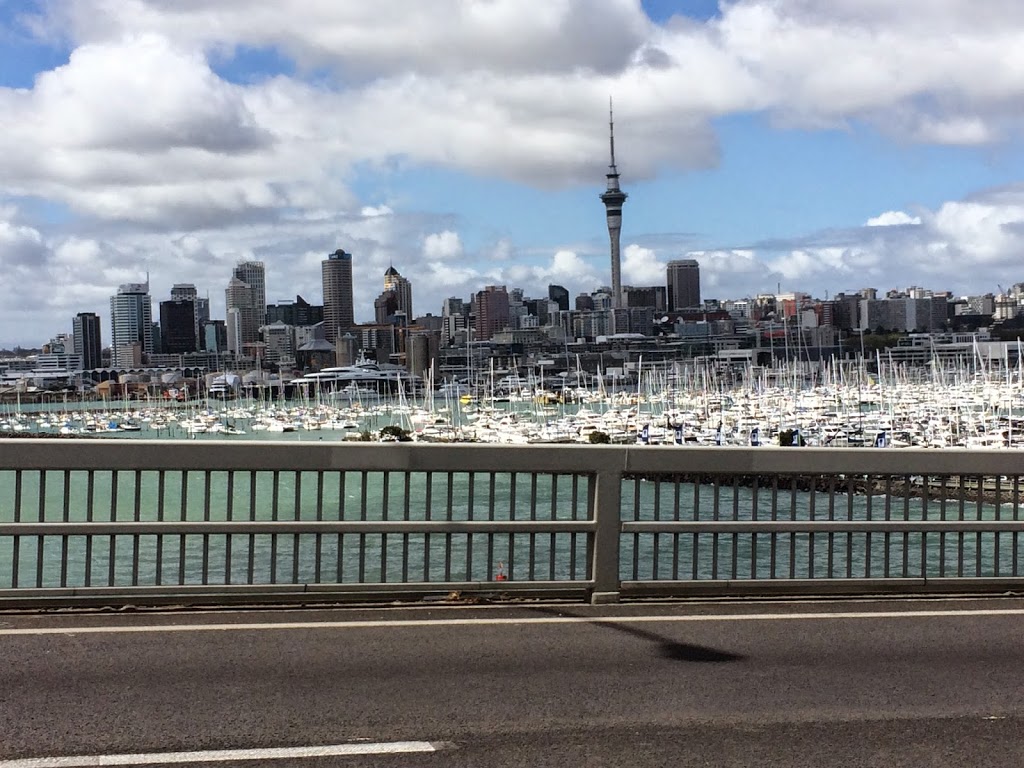 Time to leave the Bay of Islands and head south. Again the weather was a packet of allsorts, one minute a bucket of sunshine, the next a colander full of light rain, warm rain. There is only one way to negotiate Auckland and that is to drive straight down its throat. As we came closer, we saw the skyline with a few cotton clouds above it. Time for a quick snap from the window and move past another behemoth city. Auckland was for another day.
There is an option once you are back into the countryside to take the left hairpin and shoot up to Coromandel for the natural hot water springs, but we opted to make as many kilometres as we could. When you look at the map of New Zealand there is one road that bisects it like our M1, but the difference is that in some of the places this road is single carriageway! Co-incidentally, the road is called the 1. In some parts you can be stuck behind trucks and camper vans but usually there are places where the slower traffic is encouraged over to the left to allow those in a hurry to pass and then when the lanes come together the sign says ‘merge like a zip’. We were fortunate that the traffic didn’t hold us up too much and when we made the campsite just outside Tauranga we hoped to catch another like our last stay at Twin Pines. It had been a long drive, lasting almost 5 hours. Time to meet more new people, would they be as friendly?
This site had all the mod cons: showers, a very clean kitchen, a great area to eat, recycling points and to top it all, more thermal pools! After cooking ourselves a very healthy stir fry we headed for an evening dip and were joined by 5 Canadians, 2 Aussies and a Japanese couple from Auckland. It was time to share stories, the Canadians told us they had been to Napier and it was all closed by 4pm (that was then deleted from our itinerary), they had also spent the morning watching a game from the cricket world cup but weren’t very enthralled by it. Let me tell you chaps, one day cricket is just about as good as it gets. They said that the Afghan support was very vocal but they themselves left because they needed to move on and it was hardly a thriller anyway. They told us about the camper van company we had seen with the characters from Despicable Me on their sides. The company is called Wicked and they represent a unique and different part of rental market here. Apparently, one of the vans they allow their customers to rent has the words ‘free breast inspection’ (or something similar) written on it. Needless to say we were all mildly appalled but could also see the funny side. Once again, different nationalities, same conclusions.
The night before, the father of the Indian family spoke to me and he said,
“I have been to 45 countries for my work, and, I believe that all everyone wants is to just be happy. To just laugh and be content.”
Wise words indeed.
As we walked back to the camper van, I looked up to see the famous stars in this part of the world and could not believe the depth in the night. This was something out of one of those science fiction films when they show you a picture of the solar system. I swear I could see the whole galaxy. It was one of the most beautiful natural wonders I had ever seen, a treasure chest that people of all nations should see.
As we settled into our 3rd night of limited leg room in the Cabana (not a problem for mini Michelle) and I nursed a bite that made me look like Rocky Balboa under the eye, we held the windows open and gazed up beyond the heavens and let our final image of the day be the constellation above. Could this holiday get any better?