As the days pass by and we begin to see an end to this escapade, I realise just what an incredible experience it has been and how lucky we are to be here. This was summed up for me when we purchased our tickets (38 dollars each) for the ‘How the world began – Waimangu volcanic valley tour’, when the young girl serving us behind the counter asked where we were heading, and we said a little glibly “Oh, onto the South Island soon”. She smiled, her eyes widened and said, “Wow, I’m saving up to go to there, one day.” It just didn’t occur to me that it would be a struggle for anyone in the country to make the trip between the two islands. It’s a little like when people visit the UK and see more of it than we have. For example, I’ve never been to Scotland. Why? I just don’t know. Probably cause it’s always raining and cold up there ( typical southern generalisation).
We left our duck friend Bertha behind this morning as she was pestering someone else and made our way to the Waimangu Valley.
Today was a bucket list check off day.
Ever seen a volcano up close? No.
Ever seen smoking hot water temperature 95 Celsius? No.
What about a mud pool, temperature of about 70 Celsius. No, not that either.
There were a couple of unexpected bucket items that also made it onto the list and I’ll explain.
Our tour started with a view of the Geothermal crater that from nothing (after an eruption in 1886) has recovered to a verdant and foliage rich environment. 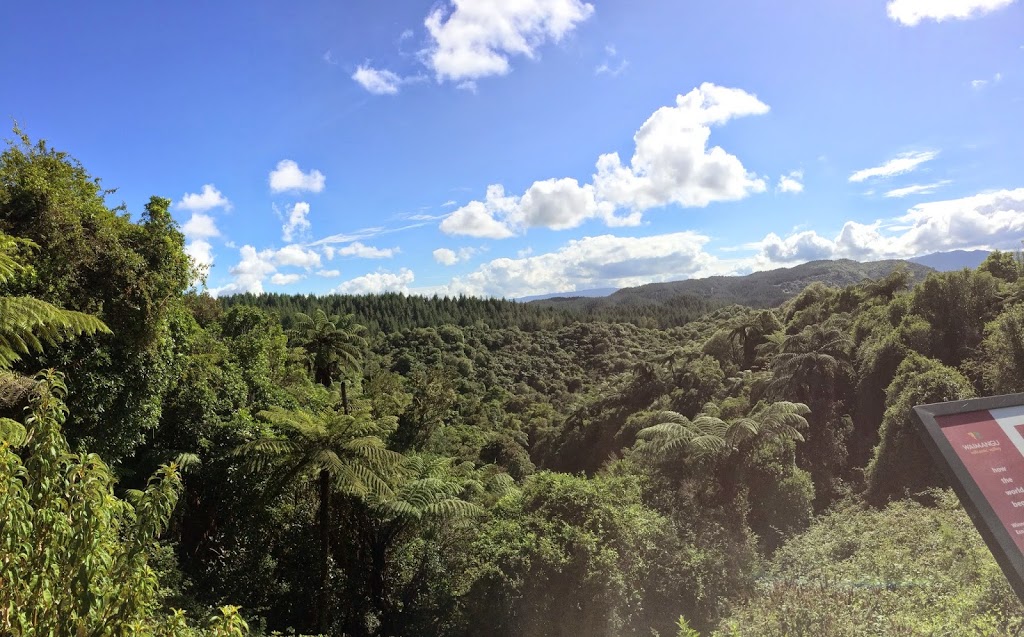 We had the before photograph and could see the after. Then, using the guided map we saw our first smoking crater in the distance. 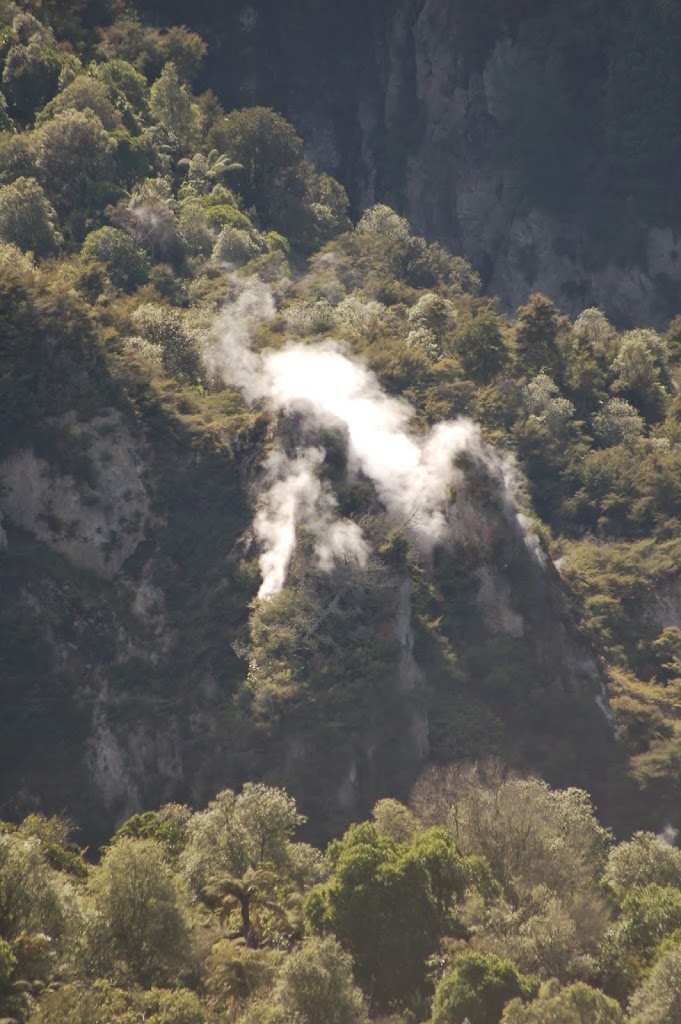 However, as we tried to allow the silence of the moment to mix with that inner excitement you get when you see something for the first time, a voice started up behind us. It was an external tour guide telling a group of tourists the Maori stories and the trouble with only hearing half the tale means that it just becomes a distraction. He spoke of 20 sons ripping off the arms of their father and how the rain was the tears of someone. It was difficult to read and digest the scientific explanation on the self-guide leaflet when these beliefs were being related to his tour party. We moved on quickly and the valley became hotter. As we came close to a lake that otherwise would be good enough to swim in, we saw the epicentre of the eruption so many years ago. There was more smoke flowing across the lake than at a Status Quo concert, and just above this was a rock face called Gibraltar, named after the famous gateway to the Mediterranean. All around us were wisps of smoke like the whole crater was smoking a pipe. This must be the only place in the world now where you won’t find a no smoking sign.

As we moved deeper into the valley, the stream ran alongside but this wasn’t your normal, run of the mill, cool mountain tributary. This was an angry boiling froth that even the mad Aussies who go for a swim in a river full of crocs wouldn’t dip their toes in. 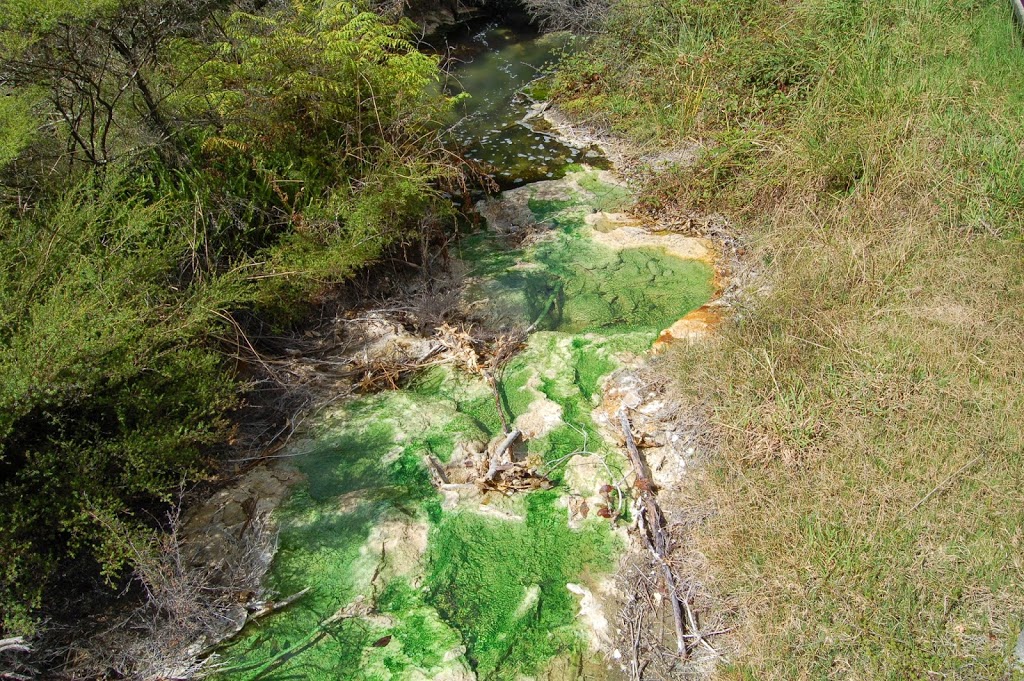 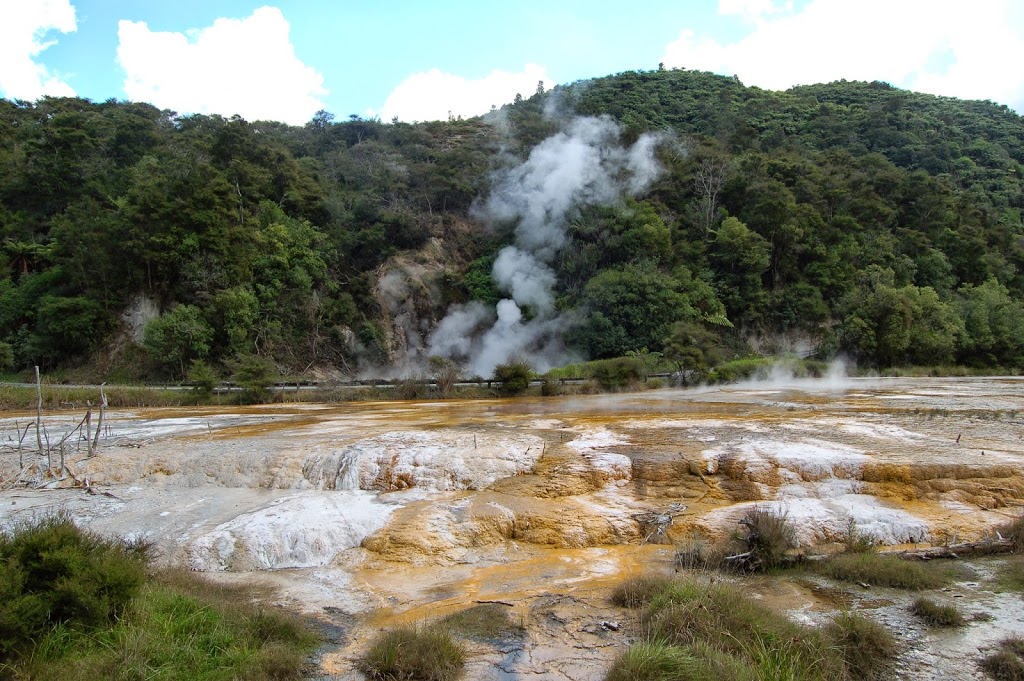 All around us were reminders of the now dormant exploding geysers, and there was even a white cross (that was beginning to be swallowed by the forest) on the hillside commemorating the deaths of four tourists in 1907.

The path then took two different routes. The first was a continuation along the valley floor and the second was a climb to see another crater and then a panoramic view. The Devitts only do things one way: the toughest. And what did I say comes with pain? The rewards.
After a 100 metre climb, we saw the Inferno crater. It was the colour of aqua and was just incredible.

The Panorama was also worth the uphill haul to see a birds eye view of Lake Rotomahana where the bus would return us to camp. Like all good tourist traps you could take a cruise on the lake beneath the volcano but at an extra cost which we declined.

Most of the day, Michelle and I had been debating whether we could make Wai-o-tapu which has a geyser that erupts at 10.15 every day and a whole host of other exciting things. Having missed the geyser, we opted for the sight of a free mud pool 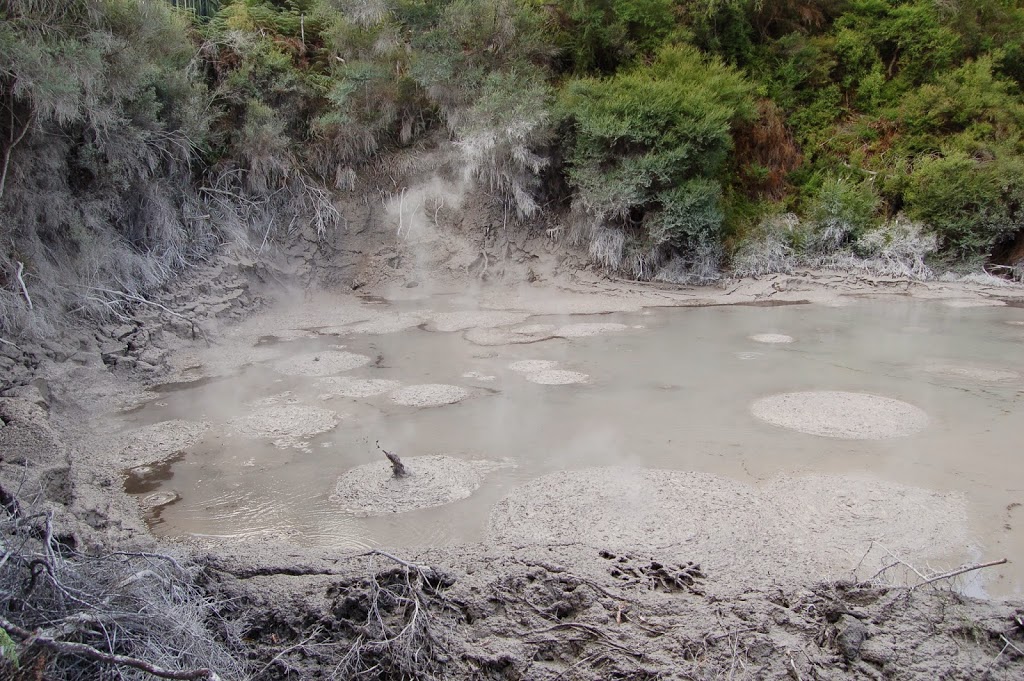 right next to the paid facility and we also had the option of a hot and cold bath in a natural confluence which was also free and open to the public. After loving the plopping mud, we arrived at said bathing area where Michelle saw a naked man sunny side up clambering around the rocks. I can’t think why we didn’t go in.

Next up was the Huka Falls, a free to enter attraction. 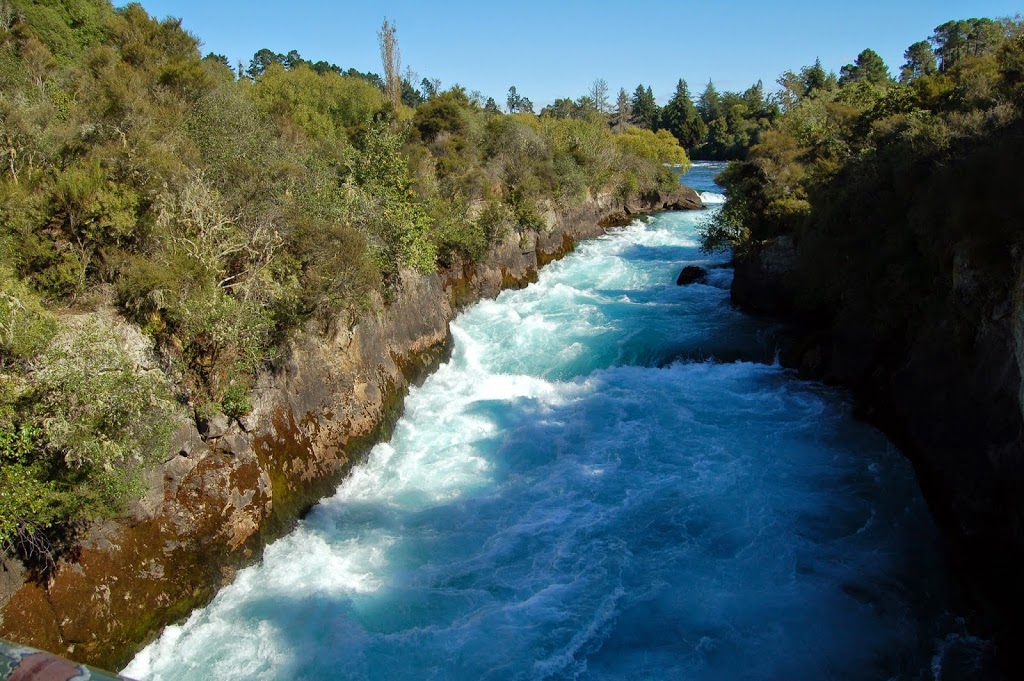 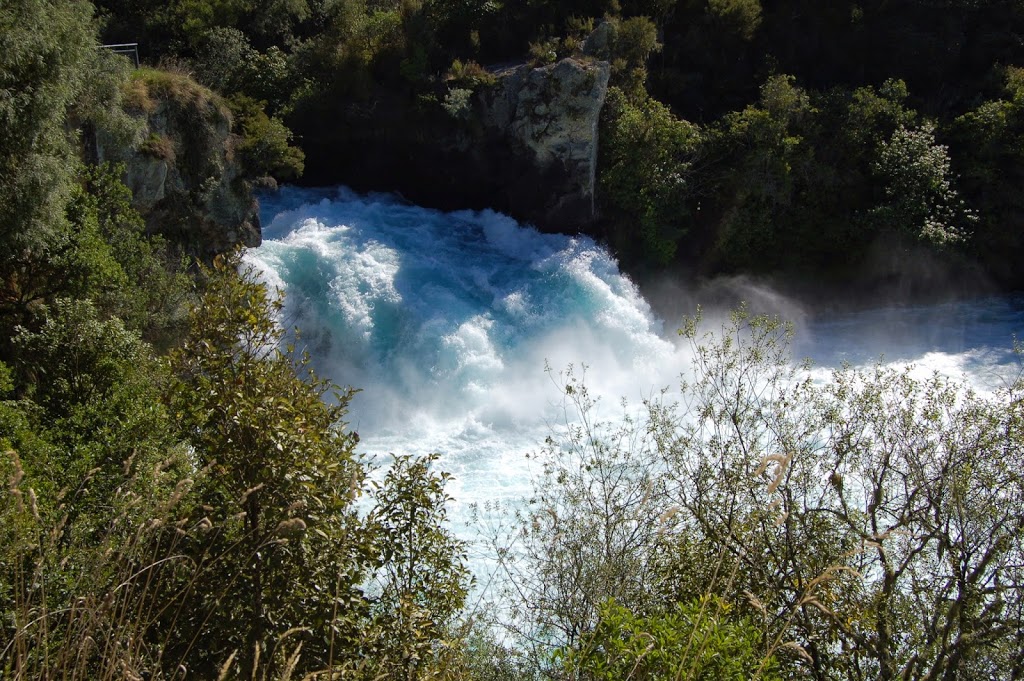 The difference between these and the other torrents of water was that they were like a mini Niagara, and I mean mini. Niagara Falls are easily the most amazing falls I’ve ever seen but these would have been a good starter: a bit like a blini. They was plenty of force in the water and they were impressive and blue!

Half an hour later, we arrived at a stunning Lake Taupo just in time to watch a number of tourists attempting a hole in one from the land to a platform set up on the lake. I’d seen this 9 years ago at the top of the Jungfrau in Switzerland and thought it was bizarre then, but this was a little more credible. 10,000 dollars to anyone that could make a hole in one. Apparently, (according to the board) 912 balls have already struck gold which means there’s an awful lot of good golfers out there. None of the people we saw were successful but we did overhear a story that one of the chaps told about a professional that turned up, ordered 200 balls and was already 60,000 dollars up when the owner arrived and had to stop him hitting any more or he would be out of business!
Lake Taupo itself is the largest lake in New Zealand and we hugged its waters edge all the way round. There were people swimming as we went in search of the next place to park Chuggaboom 7 for the night.

Our campsite was at the far end of the lake and although the wi-fi was free, there wasn’t much else going for it. The showers were dingy and barely operable and the kitchen looked like it had never been cleaned. And, I still resembled Rocky. Adrian!! Here’s hoping for better as we near Wellington! 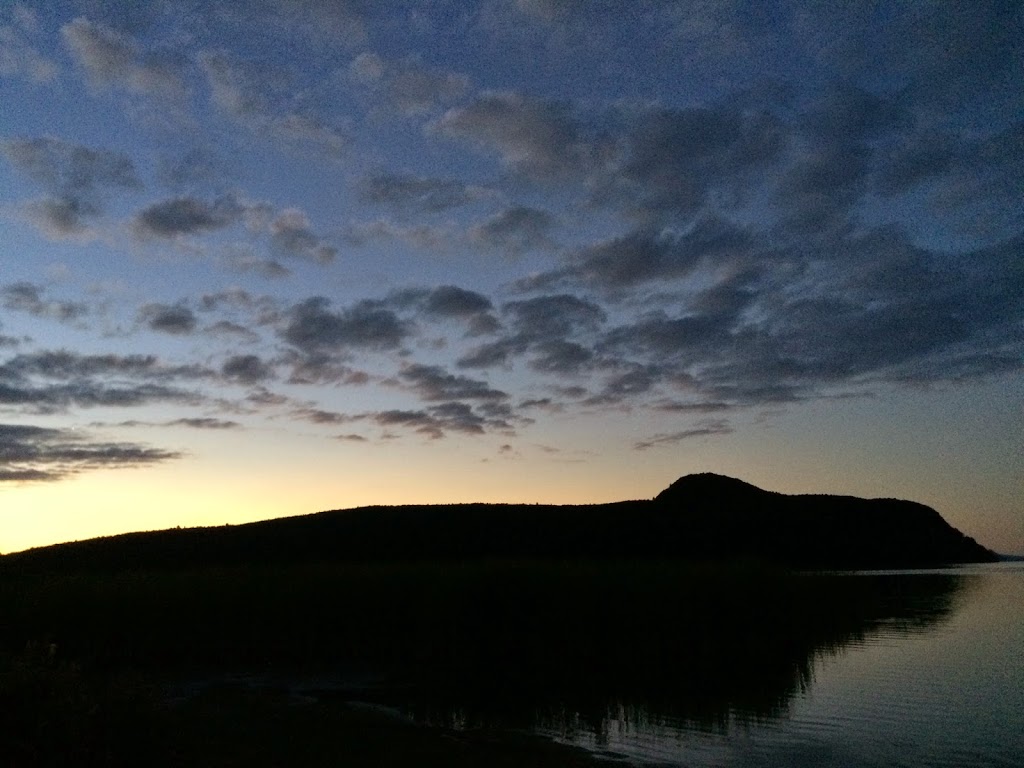