This morning, I was a man with a hangover having not touched a single drop of alcohol. As we once again flew the ramblers flag, walking to the Mall of the Emirates in another pot boiler here in Dubai, I knew there was nothing in the tank. Not even 10 tankers of Italian espresso laced with spiked vodka Red Bull was going to provide the wings needed for today’s jaunt! I sensed a smidgen of sympathy from Frau Devitt as she softened me up talking about wet celery and the whisk if I survived yet another boot camp, but that disappeared like the Road Runner on acme power skates. I grasped for it but alas it was just a mirage and her cold matron stare spoke a britannica across the table from me. As we walked (boo hoo) to the Metro (easily the best way around Dubai) I thought I heard her on the phone to someone saying words like “payout” and “mug” but maybe it was my imagination playing tricks on me in my hallucinating state.
The days itinerary had been revised after almost making Atlantis the night before, but first up was the Dubai Marina followed by Jumeirah Beach Residence 2 or JBR2 if you know da lingo!
Armed with our now expert knowledge of the travel system we were soon confidently advising other tourists having only 24 hours before sounded like a pair of meek mice squeeking questions at information desks.
The Marina is a 17km circular walk dotted with restaurants and places to admire the architecture like the twisty building (it’s not called that but it does stand out on the skyline).

We liked the area but didn’t stay long. We would recommend alighting from the tram at the Dubai Marina Mall stop and walking through the shopping area to experience the waterway.

Next up was JBR2 which is a proper tourist beach. 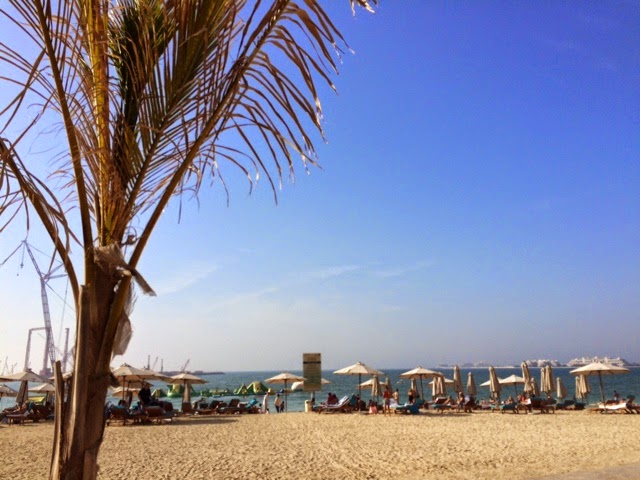 The sand stretches for miles and there are sun beds, brollies and proper double beds for non-canoodling couples all for the princely sum of 175 Dirhams (over 30 quid). There is a water adventure play area set up on the sea a little like the assault course on that BBC program Wipeout hosted by Richard Hammond but alas, no red balls! Just behind the red spongy walkway, is a panacea of eateries and restaurants where prices are more in keeping with our European expectations. We bought 2 milkshakes for 50 Dirhams (just under a tenner) from the Shake Shack, which whilst very tasty certainly ran against the pricing in our local mall. This is an exceptional beach area though and again, despite the construction work that acts like your own personal beat while you are in Dubai, we would definitely recommend this place for some winter sun. The temperatures for sun bathing are perfect and neither of us got burnt despite Michelle’s best efforts to use me as a human umbrella.

“Right a bit, left a bit. Stand there. That’s perfect.”
Once again today we saw the road system here, much like our beloved M25, fail to cope with the sheer weight of traffic. Every corner that we turned, sets of cars, coaches and beeping taxis queued impatiently. The 6 lane motorway was stood still. The beach front was a confuddled mess of expensive engines laced with orange Lamborghinis and red Ferraris. Our top tip is to use the Tram and Metro which are very cheap and interlink. They are air conditioned and run the entire stretch of the principal tourist areas of Dubai. One thing to note here is an unusual rule, you cannot eat or drink on the Metro. The fine is up to 100 Dirham. Also, there are Gold seats (for gold ticket holders) and areas of the train designated for women and children if they choose.

After a couple of dips in the sea, we decided to head toward the Palm and the now mythical Atlantis. Just a stones throw from the beach we enjoyed a hot outside shower, the rest room facilities and changing rooms. It was approaching dusk as we took the long flight of steps to the entrance of the monorail and for me the distance between places is the one part of our experience in Dubai that can catch you out. Unwittingly, our step count was rising again. The trip across to Atlantis reminded us just how far we had trekked the day before. Our carriage was a mix of nations reminding me of how London is now, and increasingly the sprawling countryside we live in. 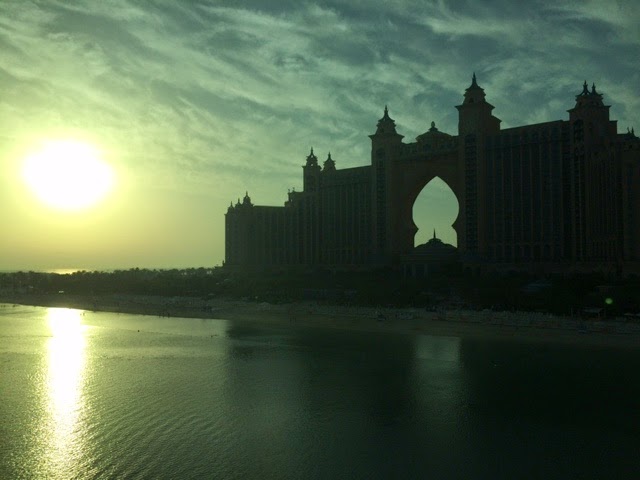 The sun was beginning to set and it became hidden behind Altantis’ imposing structure, casting shadows across the man made top branches of the Palm. Beneath us, deep foundations were being gouged in the earth and this relentless obsession with creation (like world building in simulation apps) continues. The Chinese contingent bundled off the tram desperate to be first to the building and we ambled behind mumbling sarcastically. The Atlantis itself was very much the all in one experience, with a water park that incorporates the American influence of Sea World coupled with thrilling tube rides. There were dimly lit restaurants charging 2 arms and 2 legs for a gourmet piece of fillet and a dribble of Joux. We didn’t stay long but could see families loving it here. We headed down to the beach but were surprised that the Gulf side was full of rocks with a mini wall lining the pavement. This didn’t stop the cavalcade of selfies being taken and Michelle and I have not mastered the art yet. We take about 50 pictures and then argue over which ones to keep. By the time we had everything set the way we wanted the sun had gone!  This queued up our next conversation “Shall we try and fit in the Burj Khalifa tonight, the tallest building in the world?” It was an unanimous yes but 2 hours later we had hit exhaustion again. I’m taking myself back to Woolworths after all this is over as my stop button has gone missing! From Monorail to Tram to Metro and 8 stops to Burj Khalifa station. That was the easy part. The walk from the station with legs that had gone from beyond complaining to all out strike was too much, but thank the maker it was worth it! 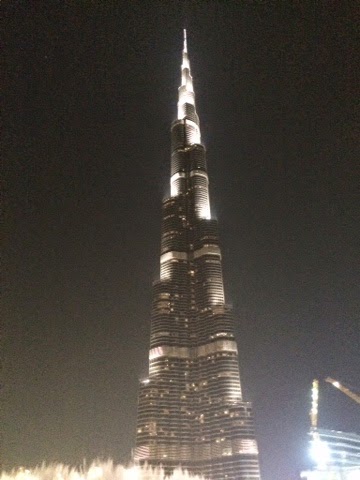 The Burj and its associated light show was spectacular. Lit by fluorescent white palms and the now accustomed flare the Arabs have for comfort, everyone enjoyed the spectacle. On the way back through the mall we saw a Samsung TV, 105 inches. Whatever happened to good old 32? Where will it end? Back to our apartments where everyone has made our stay very comfortable; and only a mile less than yesterday’s step count. I need new feet!
Next Blog from Perth.