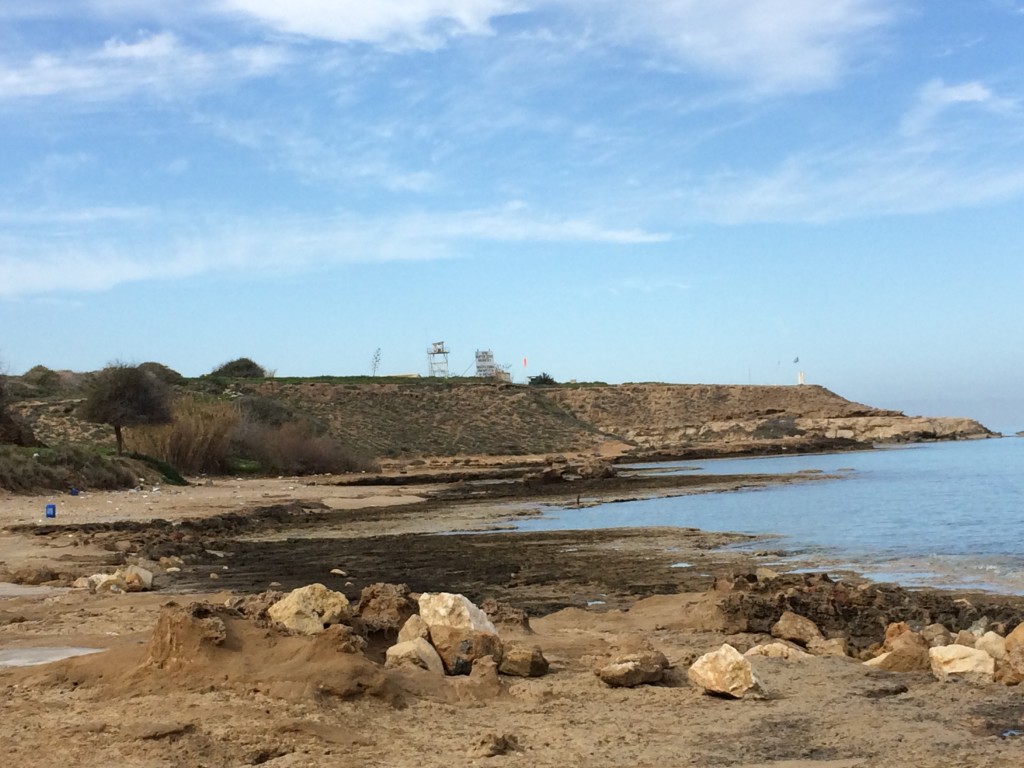 Just the other side of the escarpment in the photo is the Buffer zone of the UN, and just beyond that is Famagusta which to those from this side of the border is as important as the ‘Ring of Power’ to Middle Earth, the ‘Arkenstone’ to Smaug and the ‘Deathly Hallows’ to Harry Potter. They say that Famagusta has the best beaches on the island but they are all layed with mines and around its perimeter a black fence forbids any entry. You cannot pass the UN buffer zone by foot or by boat. If you did you could be shot. It is that simple.
And yet, as the brave Michelle and I risk life and limb, just 100 yards from the sign, I wonder now whether this coveted land can ever be really cherished again. Think of the money it would cost to uncover all the buried explosives, pull down all the hotels, bars and cafes that have been exposed to 40 years of weather erosion and restore this beach paradise that once hosted the likes of Richard Burton and Elizabeth Taylor.

I’ve tried to imagine what it must have been like on that July day when the Turkish Forces seized control of Cyprus‘ jewel in the crown. This is not like England losing Margate, Oh no, this is akin to Hastings or Whitstable. If after 40 years of neglect the usurper gave it back to them would it not be like finding an old Six Million Dollar man doll (you know, the one with the bionics), having that initial excitement as you cuddle that long lost possession, but then when you take a closer look you realise the feeling is only temporary and that in order for Steve Austin to be a man barely alive again, he would require some serious surgery.

I don’t know all the reasons why Turkey has not been granted admission to the EU but the disagreement over Cyprus must be one of them. How many generations of both cultures must pass before sense can be restored? Even if Famagusta has to remain a mummified princess why not restore her to her former glory? Is it cost or just a reminder to the southern half that the bruised trophy still exists? Why does this island so full of beauty have to cede to an ugly moment in its history? Some of those that lived either side of the border were good friends and neighbours but were forced to adopt hatred through the invective of their countries leaders and the inexorable slide their governments had set them on.

40 years on and a chessboard stalemate. The Republic of Cyprus seemingly divided as ever, sandwiched between their Greek neighbours to the west and the never peaceful countries of Syria and Iraq in the east. The Cyprus question is but a condiment compared to the full on main menu in that continent. At this moment in time, the island copes with its baggage and who am I, current ex pat to question the divide. I’m no one, but I am a fresh pair of eyes like any child asking why we can’t swim in that direction? The answer? Because of a war forty years ago. How do the parents of this country teach forgiveness when they allow such a hangover?

Whilst observing the tower that leans out across the ocean and the marker bouys, I had a boys own moment. What would James Bond do to make it into the abandoned town?

He would wait until dark, procure a speed boat and a small crew. Q would provide him with a small deadly weapon to aid his mission and as the moonlight reflected on the quiet ocean, Bond, in full diving gear would flip backwards over the side of the boat into the sea. Using Little Nellie 2, an underwater gyro copter, he would cut through the  boarder nets and make his way silently up the beach avoiding the searchlight that scours the sand. Undoing his breathing gear, he would slip out of his wetsuit revealing his tuxedo ready for a game of poker or pontoon. But pay attention 007, there’s no point. This place is a dead hostage. I just cannot see the point of the security apart from guarding the area from the unexploded mines? Do they not have the technology to find them and disarm them? Can you imagine those that have the dispiriting job of policing that every day? Ok, Private, today you’re on the lookout in Famagusta! Great, thanks!

This place hasn’t be shaken or stirred in years.