Sometimes when you reach the end of a day you wish that you could repeat it again, a sort of groundhog experience but with your own memory erased so that all the feelings are new. Day 104 in Mount Cook, New Zealand was just such a day, it was magical.
Each sunrise, New Zealand has a habit of catching me out just as the morning coffee begins to seep into my extremities, it presents me with a sight that makes my favourite drink in the world superfluous. Yes, I can reveal that even my decaf latte can be surpassed by what this country has to offer. Stand by for a few ‘wow’ moments.
Today was a cold start. Each morning when my eyes open there is a short moment when as my body boots up, a system wide check is initiated. For quite some time now, my system has detected errors and has been unable to fix them, so I feel a little like Windows ME with a small amount of memory. Someone upgrade me now!

We made an early start on the road this morning and was soon skirting by Lake Pukaki with a low cloud allowing the odd shaft of sunlight on its surface.

The roads were deserted bar the odd campervan like ourselves mooching up toward Mount Cook. The lonely mountain was not our first call though, it was the Tasman Glacier. Unlike Franz Josef, this ice formation was not revealed until we had climbed to its rim.

When we reached the top, we beheld a sight that really made us think global warming is less scientific scaremongering and more real. There was a mounted sign that explained that the glacier retracts almost a km every year. We looked around us and the clouds had all gone and those that were here in the altitude of the mountain held a silence among them that had been uncommon in most of the tourists areas we had been. This could have been because we were all basking in the sun, but maybe seeing the decline triggered an alert in us all. Nevertheless, science and facts aside, it was a beautiful sight with boats powering across the melted glacial lake so that the tourists could see the remaining ice walls up close.

One chap and his girlfriend turned their visit into a photoshoot as she gave a combination hair flick and sultry look whilst staring up at the sky.

From here we made our way to the cafe in the village so that we could enjoy a pastry in the sunshine with the snow covered peak looking down on us. That completed, we took a short drive to the base of the Hooker Valley walk that would take us directly beneath the shadow of the tallest mountain in New Zealand. This hike would take us over a number of suspension bridges and inspired by the amateur clicking away at the glacier, I asked Michelle to give me her best playboy! Do you think she missed the point?
Knowing that we may have a late night we then made our way back to the Cabana and navigated our way to Lake Tekapo where we had booked a very special evening.
Having urged the clouds away in the morning we arrived in McKenzie country checking the skies were still clear for that night as it was our observatory night sky tour. After cooking a barbecue with a view over the lake 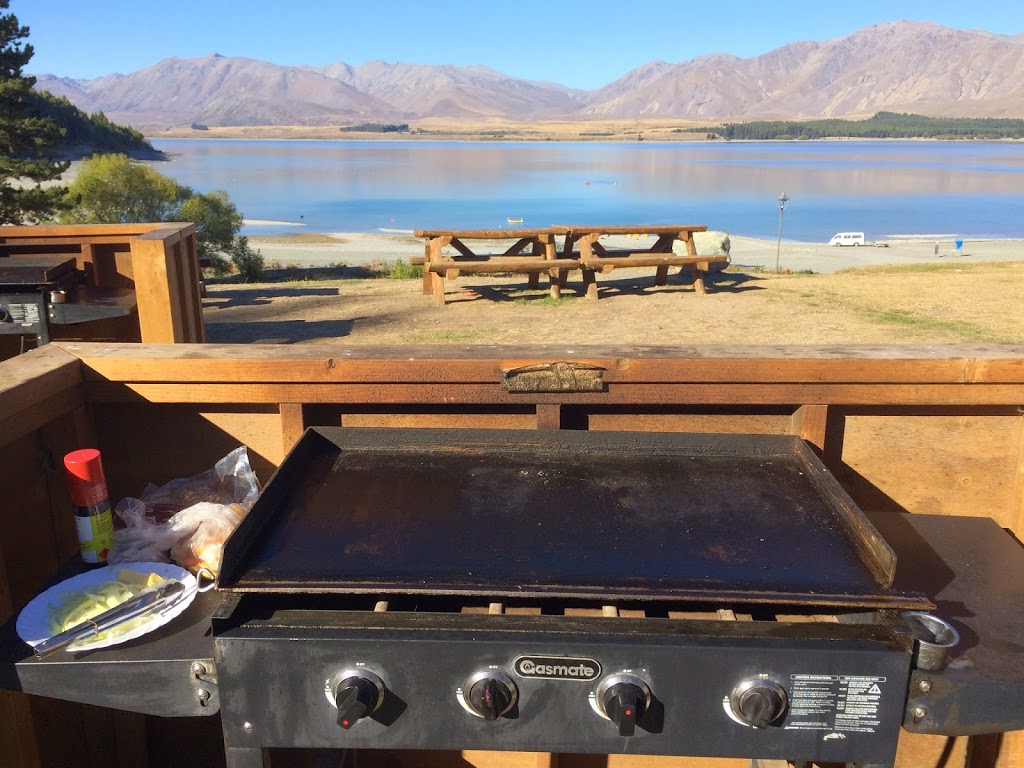 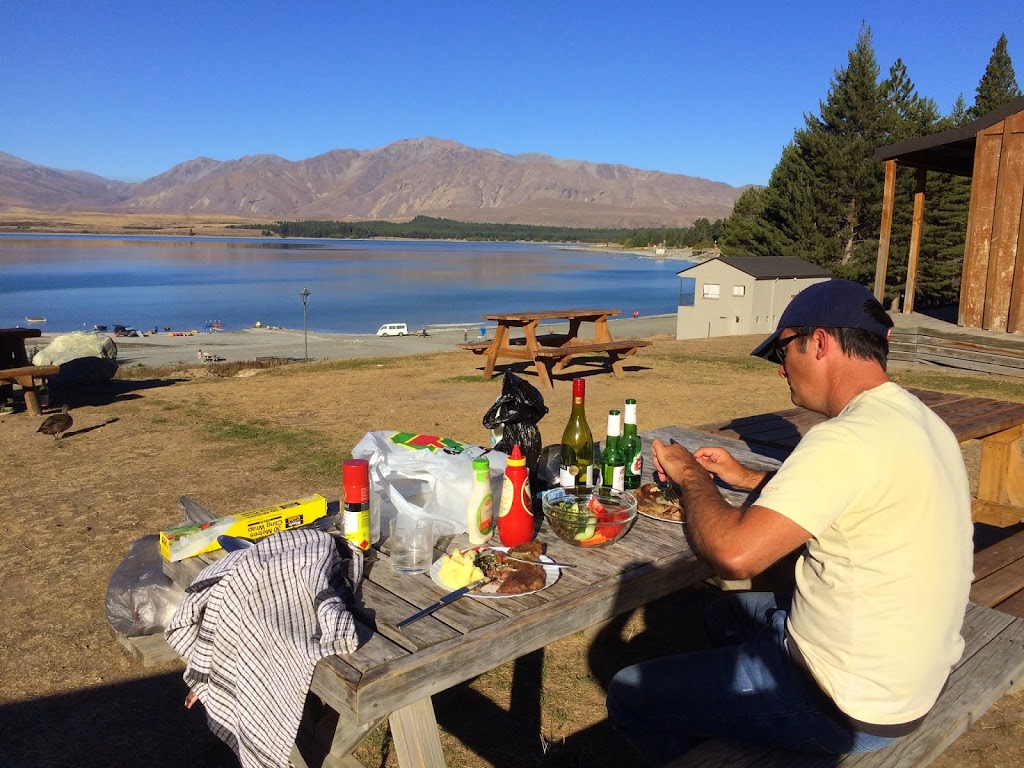 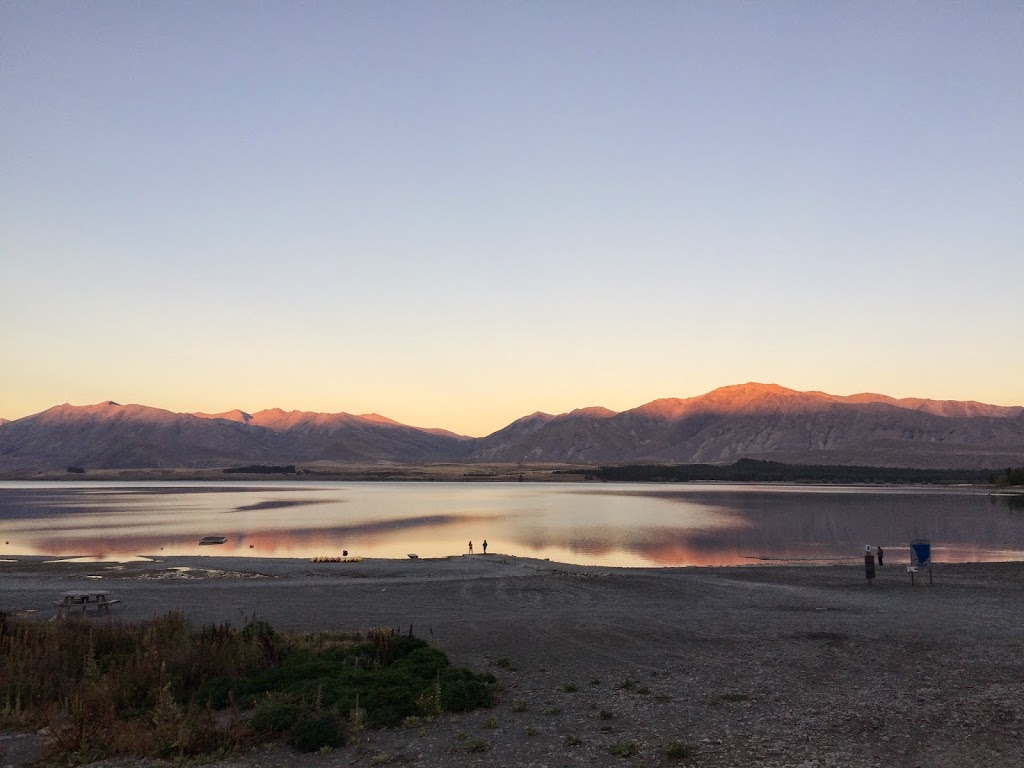 and watching the sun set behind the mountains we walked into town to a company called Earth and Sky.

The Trip to Mt John Observatory

The tour to Mt John Observatory that Earth and Sky provide is so popular we had to book it the week before. Of all the tours that we had on the itinerary this was the one with the most risk attached and I don’t mean the type that involves health insurance. This singular enterprise involves a bus trip up Mt John which is closed to the public at night and a special invitation to view the night sky through the telescopes. The cost for the event is 140 dollars each which is non refundable if the heavens are covered by cloud as the tour of the observatory still takes place.

Arriving early, we were told that there was some cloud in the area but they were not sure whether the wind was pushing it toward them or whether it was just passing by. They told us that they would not make the decision until the last minute. As more and more guests arrived for their celestial booking the same story was re-told but with a little more positivity as the minutes ticked by.
At 8.55 pm they announced that the tour was on and that conditions on the mountain were very good. There was a collective intake of relief and as they handed out an extra layer for us to wear, Michelle winked at me and said that we were no longer the Griswalds, we were now the ‘lucky Devitts’.
The driver, who was clearly thrilled to be part of this astronomy team, told us that the observatory was very active with scientists from all over the world participating in learning more about our origins and the secrets that the stars impart to us on a nightly basis. He also talked about the town of Lake Tekapo and how they had helped fund the important work that takes place at the observatory. He said that there were strong links between the town and the teams from the mountain.  We wound our way up the pass and around 400 metres from the summit, the driver informed us that he had to switch off the lights on the bus as preventing light pollution was an important part of preserving the gold standard, dark sky award which is only handed out by the international dark sky association (IDS) to those reserves that achieve the qualifying criteria. In 2012, the whole of the Aoraki Mckenzie region was given this award and so seriously do the 370 residents of the area take the award they only use covered orange monochromatic lighting in the town so that the mysteries of the sky can be uncovered . White light is the worst type of pollutant and a single set of car headlamps will taint the sky more than the whole of Lake Tekapo’s streetlights.
As we looked down into the town, we could see the evidence and then, as if on cue, a car could be seen in the distance lighting up the night sky as brightly as the stars above us.
One of the reasons we had chose this particular evening was that there was a new moon which basically means it isn’t in view and it’s light does not cover those nearby stars.
We were introduced in the dark to our guide for the evening who had bucket loads of enthusiasm for his subject. Knowing absolutely nothing about our night sky I found myself transfixed by the way he described the constellations we can see in the Southern Hemisphere and those that can be viewed from both the Northern and Southern Hemispheres. He used a green laser pointer that directly highlighted each star, showing us such greats as Alpha Centauri, Beta Centauri and the group that make the Southern Cross. We were then introduced to a couple of outside telescopes and shown certain patterns of stars in the sky. Continuing his fascinating speech our guide showed us the Milky Way and the two Magellan cloud dwarf galaxies which can only be seen in the Southern Hemisphere. As he spoke a young lady picked up our Digital SLR cameras and took them away to take astro pictures of what we were seeing. The sky was clear and the celestial heavens were alive with life beyond our imagining.
The ‘coup de grace’ though was the sights through the largest of the telescopes they have at the observatory and our guide lined us up one by one to show us the planet Jupiter and 4 of its over 60 moons. This was an incredible moment as we could see its 2 rings and it was something I will never forget. I have never seen the sky this way before and we were told that the Aoraki McKenzie area was just one of several dark sky’s in the world. Google informed me later on that night that Keilder water in Northumberland is another one and I will add this to our list of must see places so that we can view our own hemisphere.
Just before we were due to leave our cameras were returned with a set of 4 pictures which are all included on this blog. I hope you will agree just how amazing they are! The tour lasted 2 hours and for those that have no knowledge it was a great lesson in the constellations! The sky was more than a set of Christmas tree lights it was a set of quiet fireworks better than any New Years display and I shared the silence with around 20 other people and of course Michelle who made all this possible!
There’s a star up there somewhere with her name on it 🙂 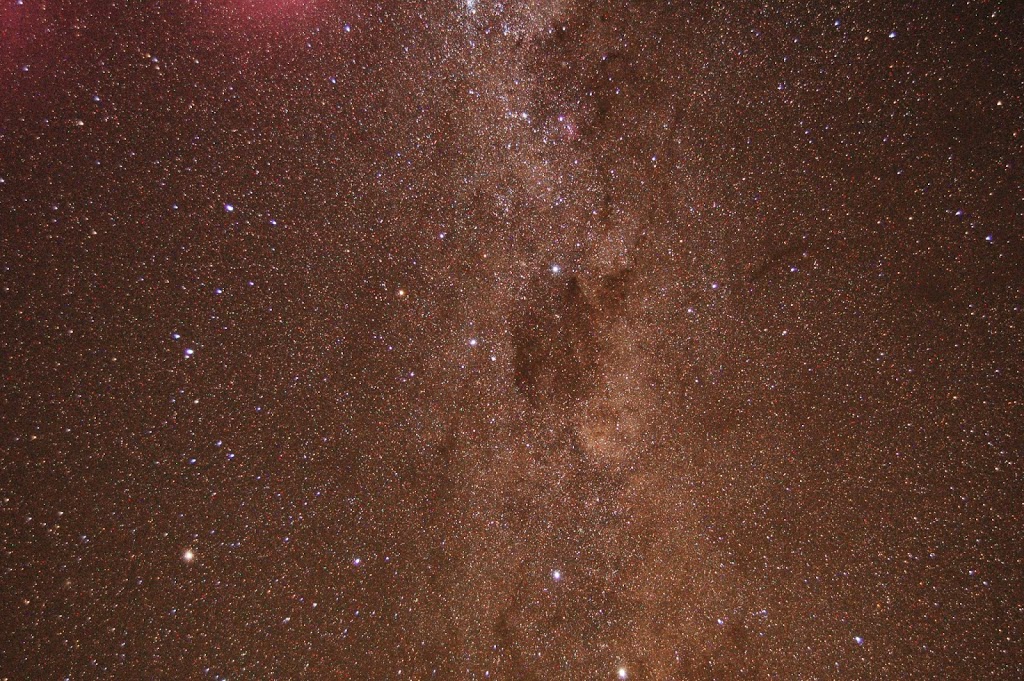 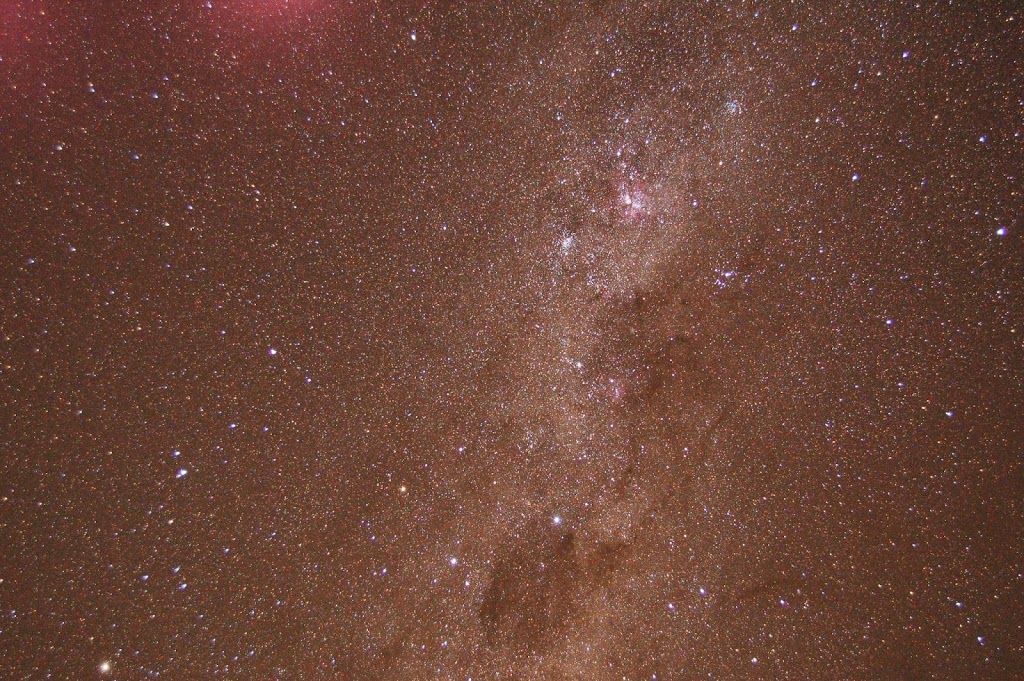 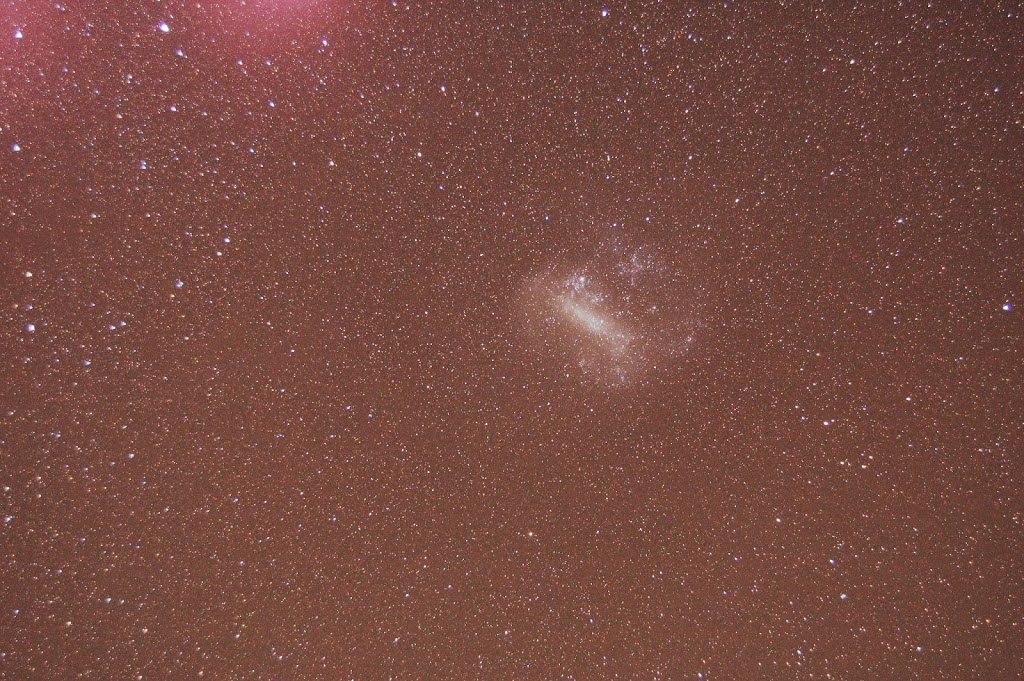 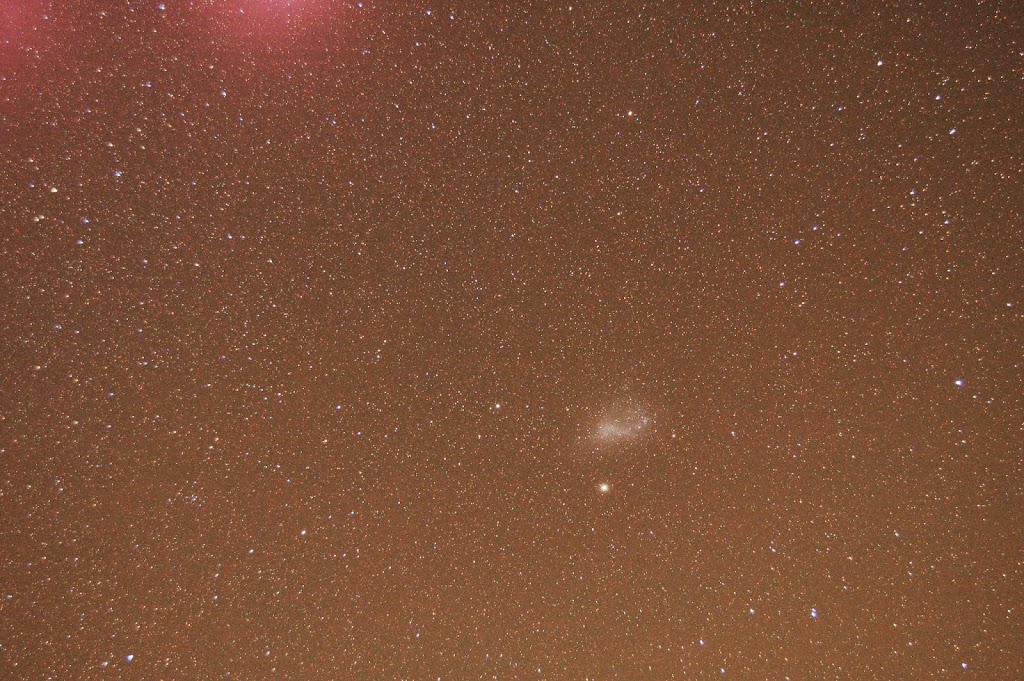